Music Cantor, cantor with musical accompaniment and choirs on weekends; depends on Mass.

Additional observations  St. Augustine was established as a parish in 1919; the current church opened in 1957.  It is a magnificent Gothic-style church, with high rib vault ceilings, beautiful stained glass, carved stations of the cross and a suspended crucifix over its central altar.  Along its side walls are small alcoves devoted to saints.  It is located across the street from Sony Studios, formerly MGM Studios.  Father John O’Donnell, St. Augustine’s pastor 1923-38, was friendly with studio executives, and acted as a technical advisor on MGM films.  The church’s famous guests included Bishop Fulton Sheen, who spoke at the new church’s dedication in 1958.  Many an actor on the way to audition for a part at MGM would stop at the parish to pray for success; Joan Crawford, for example, was a regular visitor.  In 2001, the church made the news after an angry Muslim radical attacked statues at the church, beheading a statue of the Blessed Virgin Mary, hacking off a hand of a St. Rita statue and cutting a Junipero Serra statue off at the feet and taking it to a mosque.  He was convicted and imprisoned. 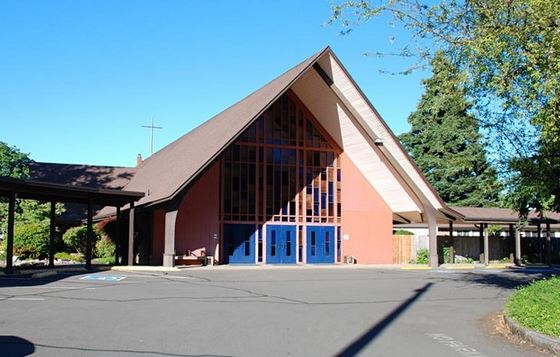