Why the Cardinal McCarrick laicization matters 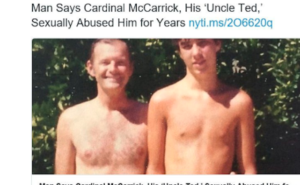 The following comes from commentary written by George Weigel on Feb. 19 in First Things.

On Saturday, February 16, the Holy See announced that the former archbishop of Washington, Theodore Edgar McCarrick, had been “dismissed from the clerical state”—laicized—for the grave ecclesiastical crimes of sexual solicitation in the confessional and the sexual abuse of minors, compounded by the abuse of authority. Within a few hours, the Washington Post had a story up on its Web site, asking, in effect, so what? Or as a former Church employee put it to Post religion writer Michelle Boorstein, “The reality is that, leaving aside the issue of embarrassment, and I’d be cautious on that, what difference does it make to McCarrick?….Realistically, when we think of justice, what will he experience? And he will know in his heart of hearts that he’s still a priest.”

The last, of course, is true enough, in that neither the wickedness in which Theodore McCarrick engaged, nor the penal action of the Church, has destroyed the sacramental character he received on the day of his ordination. But what difference did his laicization make?  Let me suggest an answer. The difference it made is that, two days ago, Theodore McCarrick did not celebrate Sunday Mass for what was likely the first time in sixty years, eight months, and two weeks.

I have no idea what Mr. McCarrick’s present mental condition is, although he is said to be suffering from dementia and is not fully aware of what has happened to him since last June, when his crimes were first publicly revealed. But if this man who exercised the ministry of priest for more than six decades has any awareness of his situation, no more damning sentence—no more crushing penalty—could be imagined than the prohibition of celebrating Mass. Anyone who doesn’t understand that doesn’t understand the priesthood of the Catholic Church…..

McCarrick was not my friend; quite the opposite, in fact. But I can only hope that if, in whatever diminished way, he feels the pain of being forbidden to function as a priest at the altar, that pain is purifying and cleansing….

Father Reese: Cardinal Pell crossed the lineI did not care about his theological views

Father Reese: Cardinal Pell crossed the line
I did not care about his theological views

Cardinal Pell sat down with accusers in RomeA big, brash, blunt man, given to plain speech and unafraid of conflict

Cardinal Pell sat down with accusers in Rome
A big, brash, blunt man, given to plain speech and unafraid of conflict