Waiting for the decision on marriage 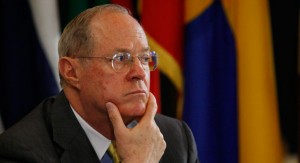 The following comes from a June 16 The Catholic Thing article by Hadley Arkes:

Before my column appears again, and the cock crows three times, Justice Kennedy will have made up his mind as to whether he would be pleased to preserve for the American people the institution of marriage as the union of one man and one woman.

As Justice Kennedy has himself said, that arrangement has been with us for “millennia.” And yet it is Kennedy’s call, because there are four justices on the Supreme Court immanently ready to impose, as a requirement of the Constitution, virtually anything that the cultural Left is willing to advance in the name of “progress” and liberation. By simply adding his vote, Kennedy can bring about an outcome in which a bare majority of five persons can unsettle our laws and wreck an institution that has been bound up with “the laws” ever since there have been laws.

And the word has been that Justice Kennedy would prefer to accomplish his ends, in the cases on marriage, without creating another Roe v. Wade. With the decisions already taken, Kennedy and his liberal colleagues have put in motion many judges in the lower federal courts to carry through the work and install same-sex marriage even without the need for the High Court to do more.
But if Justice Kennedy stops short, how would he do it? He could hold to his earlier view in the Windsor case, where he radically and implausibly denied that the federal government had any authority to pronounce on the meaning of marriage. Marriage, he could try to say again, must depend on the laws of the States.

But at the same time he could strike down the remaining part of the Defense of Marriage Act, which also happens to be the part that I had marked as the key component of the Act when I helped design it: The States would not be obliged to respect same-sex marriages coming in from another State. Unless that point were in place, one State could indirectly nationalize same-sex marriage for the rest of the country.