The slums of your heart 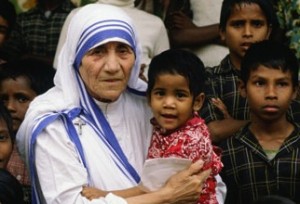 The following comes from an Oct. 21 story on the site of the Catholic News Agency.

“The world today is upside down, and is suffering so much, because there is so very little love in the homes and in family life.”

One could easily attribute these words to any number of participants in the extraordinary gathering of the Synod of Bishops in Rome that recently came to a close.

But, in reality, these were the words of Blessed Mother Teresa of Calcutta in an interview with a Christian magazine nearly two decades ago.

“She was talking about the breakdown of the family way before anybody else,” explained David Scott, vice chancellor for communications at the Archdiocese of Los Angeles. “Over and over again, she would tell people, ‘You deal with the poor in the abstract and you forget about the poor in your own home’.”

“The poor are the kids you’re ignoring to do your job,” Scott said. “They’re the wife you’re ignoring at the end of the day, when you come home from work. Love really does begin in the home.”

Scott is author of a newly published book titled The Love that Made Mother Teresa: How Her Secret Visions and Dark Nights Can Help You Conquer the Slums of your Heart (Sophia Institute Press, 2014). Currently available online, the 113-page book is part biography and part catechesis.

Blessed Mother Teresa became a household name after she was featured in the Malcolm Muggeridge-produced BBC special Something Beautiful for God. In 1979, she won the Nobel Peace Prize.

Despite her international familiarity, very little is known about the life of the Albanian nun. She was born Agnes Gonxha in 1910 in present-day Macedonia. She first recognized her call to religious life during an annual family pilgrimage to a local Marian shrine.

In 1928, she traveled to India to join the Sisters of Our Lady of Loreto. Nearly two decades later – while riding a train from Calcutta to Darjeeling – she was inspired to start a new religious order: the Missionaries of Charity….

Scott told CNA that his book is geared toward Catholics who may mistakenly think they know everything there is to know about Blessed Mother Teresa.

“That’s certainly how I was when I starting writing the book,” he reflected. “I thought she was a neat nun who did neat things with the poor. But, the more you know about her, the more you realize she was a mystic living in the slums.”

Knitters for the Lord ramp up for ChristmasCapistrano shut-ins touched