….Faithful Catholics might assume that de-Christianization began with the secularization of American culture in the 1960s. They would be wrong. The “Keep Christ in Christmas” campaigns so prominent among Christians today go back at least as far as the years immediately following the end of World War II. In his book, Consumer Rites: The Buying and Selling of American Holidays, historian Leigh Eric Schmidt notes how in 1949, a Catholic organization, the Archconfraternity of Christian Mothers, first launched a poster and billboard campaign in Milwaukee to “Put Christ Back into Christmas.”

The sentiment clearly touched some nerve in the broader public, for it soon spread beyond the Catholic enclaves of Milwaukee to other Christian groups and civic organizations throughout the country. In towns and cities across America, these groups joined together to erect public Nativity scenes and sponsor “Christ in Christmas” parades. The campaign was by all accounts of the time a great success.

The “Put Christ Back into Christmas” campaign of the 1950s suggests at least two historical interpretations. At one level, it seems to reflect the historical reality of a still vibrant public Christian culture. Historians agree that the 1950s saw a tremendous increase in public expressions of religious sentiment in everything ranging from Sunday church attendance to the box office success of biblical epics such as The Ten Commandments to the addition of the phrase “under God” to the Pledge of Allegiance. At another level, it suggests alarm at a growing turn away from Christ within a culture that still saw itself in some sense as basically Christian.

According to Schmidt, concerned Christians located the problem not in secularism per se, but rather in “the commercialization of Christmas.” Schmidt argues that the religious protest against commercialization began in the nineteenth century and had become standard seasonal fare by the 1930s. In 1938, a Protestant minister lamented: “At Christmas time when spiritual values should be upper-most in the minds of people, the land is inundated by a tidal wave of commercial activity and materialistic self-seeking that quite obliterates the quiet, peaceful, spiritual meaning of the birth of Jesus Christ.”

If the Great Depression could not suppress the threat commercialism posed to Christ, no wonder that the great economic boom of the postwar years only exacerbated the fears of religious leaders. Still, no amount of religious indignation could stem the tide of commercialism. Speaking from my experience of growing up in a devoutly Catholic home toward the tail end of the Baby Boom, I can say sadly that Jesus finished a distant second to toys in my Christmas imagination. Yes, we had an Advent wreath, a manger scene and went to Mass on Christmas Day (later in my childhood, the Vigil, with my mom playing in the folk group), but my central devotional act of the Christmas season lay in endlessly pouring over the pages of the Sears Christmas Catalog.

Curiously, commercialism remains a somewhat elusive target for righteous indignation. The secularism that developed during the 1960s easily conjures up the image of village atheists objecting to creche scenes in front of town halls. (My small town in western Virginia continues to display a creche but also allows secular humanists to post a seasonal manifesto of their principles of goodwill in front of the courthouse). Popular Christmas stories do contain powerful embodiments of the evils of the commercial impulse, but figures such as Ebenezer Scrooge in A Christmas Carol or Mr. Potter in It’s a Wonderful Life are misers, not merchants pushing consumerism.

Schmidt offers at least one possible explanation for merchants’ success at evading responsibility for driving Christ out of Christmas: they have often been very visible supporters of campaigns to Keep Christ in Christmas. He notes that the original 1949 campaign initiated by the Archconfraternity of Christian Mothers garnered support from roughly two hundred Milwaukee merchants….

The above comes from a Dec. 31 story in Catholic World Report. 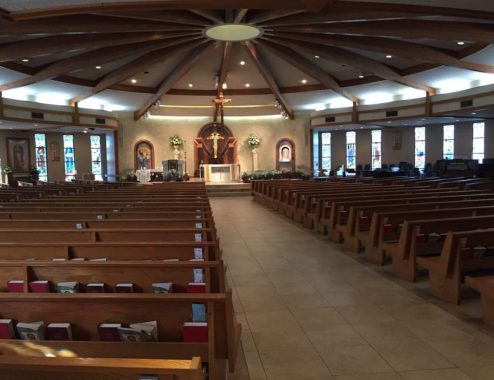 Stained glass in San Francisco has a story
In 1944, priest wrote letter complaining of "garish light"