The following comes from an April 12 Whispers in the Loggia blog post by Rocco Palmo:

The choice would mark another move by Francis to highlight the “peripheries” toward which the pontiff has ceaselessly prodded the church; Pierre’s first assignment as a Nuncio was a four-year stint (1995-99) in Haiti, the poorest country in the Western hemisphere.

In addition, two weeks after the Pope’s long-desired stop at Mexico’s US border – and subsequent doubling-down on the advocacy that spurred it – what would be a provocative transfer north given the US’ current political climate would bring a figure intimately familiar with matters of immigration as the Holy See’s representative to the US government, to say nothing of the Nuncio’s role as the Pope’s eyes, ears and voice to an American Catholic fold which has been transformed (and, in some quarters, roiled) by a historic influx from Latin America. On yet another key front, unlike the prior lead occupants of 3339 Massachusetts Av NW, Pierre would arrive in the States with an unusually well-steeped understanding of the church in the Southern and Western US, which have jointly surpassed the old bastions of the Northeast and upper Midwest over recent years to become the home of a majority of the nation’s 70 million faithful.

As Francis marks the third anniversary of his election on Sunday, it bears recalling that Papa Bergoglio has bucked the tradition of his predecessors in opting to stick with the US representative he inherited for a lengthy period of time. Over the last half-century and more, each new Pope has traditionally placed a diplomat of his own choosing in Washington within the first year or two of his pontificate, reflecting the assignment’s immense clout both on geopolitical and ecclesial fronts, above all in the Nuncio’s most consuming and consequential function: compiling the extensive amounts of consultation, research and reports which set the stage for the appointment of every American bishop.

Named to the US in October 2011, Viganò’s assignment to the post was widely perceived as an “exile” from Rome in the wake of his unsuccessful campaign to root out mismanagement and graft in Vatican City’s finances and contracts as the city-state’s deputy mayor. Within weeks of his arrival in Washington, the archbishop’s earlier pleas to Benedict for his support in the reform effort became a centerpiece of the incendiary “Vatileaks” document haul, which destabilized the Curia for the bulk of 2012 while winning Viganò a reputation for courage in the face of apparently irredeemable corruption.

In the wake of Francis’ election, the new Pope’s push for Curial accountability and a financial cleanup led to well-placed expectations that Viganò would see his triumphant return to Rome in a top post. The speculation turned to naught, however, after a smear campaign by the archbishop’s enemies which circulated in the Italian press is believed to have short-circuited the move. 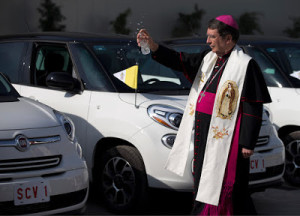 Having laid the groundwork for the Pope’s markedly successful East Coast trip last September, the career diplomat landed in the center of another firestorm in the visit’s wake when it emerged that Kim Davis – the Kentucky county clerk whose brief imprisonment for refusing to perform same-sex marriages on religious freedom grounds became a cause celebre in the culture wars – was quietly greeted by Francis at the DC Nunciature between public engagements. In a remarkable clarification issued in response to the furore caused by word of the meeting, a Vatican statement said that, with Davis among “several dozen” people present, “such brief greetings occur on all papal visits and are due to the Pope’s characteristic kindness and availability.”

Emphasizing that “the Pope did not enter into the details of the situation of Mrs. Davis and his meeting with her should not be considered a form of support of her position in all of its particular and complex aspects,” the statement sought to further distance Francis from the clerk in adding that “the only real audience granted by the Pope at the Nunciature was with one of his former students and his family.” Long based in Washington, the former student was later found to be openly gay and had brought his partner to the encounter.

Having won wide esteem among the US bishops with his gracious style, quiet assists and commitment to a heavy travel schedule to take part in local church events, Viganò was feted by the bench at last November’s plenary in Baltimore with the traditional champagne sendoff which the USCCB accords to a Vatican representative attending his final meeting. That said, as the archbishop’s success at ultimately obtaining the appointments of those he’s recommended has largely been stymied by the influence of the Stateside cardinals on the Congregation for Bishops – whose votes determine the ultimate endorsement of a candidate to the Pope – Viganò’s “swan song” pick on these shores is understood to have been the July elevation of one of his favorites, Fr. Robert Barron, as auxiliary bishop of Los Angeles. At the time, the move stoked widespread amazement among the American hierarchy given the highly unusual transfer of the Chicago-based media titan to the global capital of pop culture.

As previously reported, with almost a dozen of the nation’s 197 dioceses currently awaiting new leadership, the bulk of the docket has been in a holding pattern over the last several months in anticipation of a new Nuncio. Once the transition has taken place, further delays are expected as the newcomer reviews the pending files and familiarizes himself with the lay of the land.

U.S. bishops to blame for border sufferingCatholic leaders must do better than “welcoming the stranger”

U.S. bishops to blame for border suffering
Catholic leaders must do better than “welcoming the stranger”

Why would anyone follow German bishops’ lead?Phil Lawler points out that millions of Germans are leaving the Catholic Church

Why would anyone follow German bishops’ lead?
Phil Lawler points out that millions of Germans are leaving the Catholic Church

The Cardinal Pell memo in fullCirculating among cardinals in 2022, author revealed this week to be the just deceased Australian prelate

The Cardinal Pell memo in full
Circulating among cardinals in 2022, author revealed this week to be the just deceased Australian prelate