The killing, not the sex 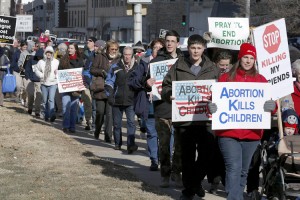 The following comes from an Aug 12 posting by Rachel Lu on the Federalist.com.

Writing at Mother Jones, Kevin Drum poses a great question. Actually, he has a couple of questions:

Do anti-abortion activists really think abortion is murder? Or is their opposition merely an expression of their broad discomfort with modern sexual and gender mores?

I appreciate Drum’s forthrightness. A lot of liberals wonder why pro-lifers rally and lobby and stand in the rain outside abortion clinics: can it really be that they care about babies? No, pro-lifers probably do these things because they have old-fashioned views about sex. They know that abortion has enabled modern women to lead a “sexually liberated” lifestyle. And they want to stop it because they do, in fact, want to see wayward women “punished with a baby.”

It’s rare for someone to pose the question as directly as Drum has. But I know he’s not alone in thinking this way. I see the contempt with which liberals accuse conservatives of caring about children “only before they’re born.” Obviously that smear reflects other policy disagreements as well, but it still speaks to a real skepticism about the authenticity of conservative concern for unborn life.

Okay, then. Are you ready for this, Mother Jones readers? I’m going to answer the question.

Yes. Pro-lifers really believe that abortion is murder, i.e., the unjust killing of an innocent human being.

Why would liberals doubt this? I’ll just cut to the chase and admit right now: I think it’s partly just bad faith. It can’t feel good to be the guy in favor of killing (at parental convenience) something that really does look quite a lot like, you know, a human baby. Instead of facing up to the real implications of something so icky, better to deflect by accusing the other guy of nefarious motives.

I don’t think that’s the whole story, however. There actually are some non-ridiculous reasons to question the depth and reasonableness of pro-lifers’ commitment to the unborn. It’s worth taking the time to address these, for the edification of Drum and anyone else who thinks parents should be free to end the lives of their unborn daughters and sons.

This much Drum has right: conservatives have issues with our sexually libertine culture. Abortion isn’t the only problem with it, just the worst one. The killing of hundreds of thousands of babies annually is a pretty massive “con” to sexual liberation. That’s hard to top (so to speak).

Drum’s theory might make sense if the pro-life movement were some radical fringe.

But there are plenty of other problems too. I could just rattle off a list: divorce, single motherhood, spreading HIV, pornography addiction, falling marriage rates, falling birth rates, campus “rape cultures,” teenaged girls who kill themselves after a porn star debut that they thought they could handle. Or, I could refer you here and here for more thoughtful reflections on how much we harm our young people by pretending sex never does. But the bottom line is that people nowadays are having a really hard time putting their love lives in order and, yes, our sexually libertine culture deserves some blame.

So I suppose it’s possible that some people’s pro-life convictions are rooted, primarily, in that general sense of alarm about “modern sexual and gender mores.” Here’s a question, though: how many other entry points are there for talking about the evils of sexual libertinism? A million? Drum’s theory might make sense if the pro-life movement were some radical fringe. If the March for Life were a piddling little event that someone threw together a year ago, or if #prolifeacrossamerica were another flash-in-the-pan hashtag campaign, then sure, it might be fair to reflect on whether people were really serious.

Pro-life activism has constituted one of the most important political and moral movements of our time.

It’s not like that. Pro-life activism has constituted one of the most important political and moral movements of our time. It has left its stamp on our politics quite literally over decades. It draws thousands together in peaceful rallies every year, all across the country. Nearly a fifth of Americans say they are unwilling to vote for a candidate who is not pro-life. And it has affected the moral development of our young people. As a professor of moral philosophy, I’ve heard scores of students explain to me how pro-life activism was their main entry point into thinking seriously about moral responsibility, personhood, and what a human life is worth. This is a big deal, Kevin Drum.

You can’t sustain a movement on that scale without a serious moral foundation. Paranoia about sex isn’t enough. After all this time, conservatives deserve to be taken seriously when they say they care about life….