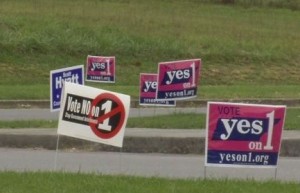 The following story comes from a Nov. 5 (12:09 a.m.) story in the Tennessean.
On Oct. 31 California Catholic Daily reported $781,200 spent by Calif. Planned Parenthoods in the Tennessee fight.

The measure was perhaps the most closely watched and most contentious Election Day vote in Tennessee’s midterm elections, which had few contested high-profile candidate races this year. It also was one of the most expensive ballot measures in Tennessee history.

It passed with 53 percent of the vote, but there was a clear urban and rural divide, with Davidson County voters opposing the measure by a 2-to-1 margin, and voters in Shelby, Knox and Hamilton counties voting against the measure.

Its passage has no immediate effect on abortion policies in Tennessee. But it will give lawmakers far more power in enacting abortion regulations and restrictions in Tennessee.

Already on Tuesday night, at least one newly elected state lawmaker, Sumner County Rep. Courtney Rogers, had pledged to back abortion restrictions when the legislature reconvenes in January.

Backers of the amendment were jubilant, embracing at the offices of Tennessee Right to Life, the campaign headquarters for the effort.

“Obviously for those of us who believe life is sacred, this was the necessary first step toward protection not only for the unborn but for women and girls who fall prey to people looking to profit from untimely or unexpected pregnancies,” said Brian Harris, president of Tennessee Right to Life and a coordinator for the “Yes on 1” campaign, who has devoted much of the past 14 years fighting for the measure to get on the ballot.

Harris said his group’s next step is returning to the legislature to persuade lawmakers to restore a package of laws stricken by a 2000 state Supreme Court decision, including requiring a short waiting period for women seeking an abortion, a requirement to provide educational materials and greater regulation of abortion facilities….

One in four abortions in Tennessee is sought by a woman from out of state. Proponents of the measure called on Tennessee voters to end the state’s status as an “abortion destination.”

Opponents of the measure said Tennessee, bordered by eight states, has long been a destination for quality health care. Abortion restrictions in surrounding states have made the South increasingly hostile to abortion rights, prompting women in neighboring states to travel here for the procedure….

The campaign has proved to be the most expensive referendum ballot in recent years. The “Yes on 1” and the “Vote No on 1” campaigns raised more than $5 million combined, spending most of it in a barrage of television and radio ads in the weeks leading up to the election.

In the first three weeks of October alone, the “No” campaign spent more than $3.4 million on its efforts to defeat the measure. Most of the contributions came from Planned Parenthood affiliates in Tennessee and other states, as well as the American Civil Liberties Union. The two groups are the primary organizers of the “No” campaign.

The “Yes” campaign spent more than $1 million in October, almost entirely on campaign advertizing — thanks in part to raising $670,000 in the first three weeks of the month. The majority of “Yes” campaign contributors were individuals, with churches and abortion opponent groups making contributions as well. Tennessee Right to Life was the primary organizer of the “Yes” campaign.