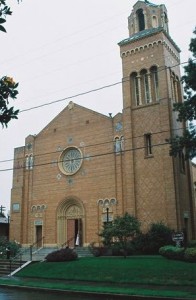 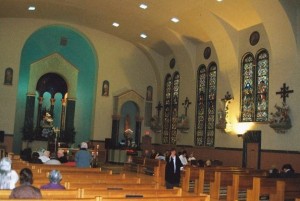 Names of priests Father John Boyle, JCL.  Father Boyle is a traditional priest who came to Portland to serve as director of the marriage tribunal.  He’s originally from the archdiocese of Southwark, in the greater London area, and also served in upper peninsula Michigan before coming to Portland in 2013.  He wears the cassock, is active in leading 40 Days for Life, and celebrates a reverent liturgy.  Read his blog (although he hasn’t posted for a while): https://caritasveritas.blogspot.com/.  He became pastor of the parish in February 2015.  Celebrants for the Tridentine Mass include 82-year-old Father Robert Palladino, a former Trappist monk who left the priesthood and married, then returned to the priesthood after he was widowed.  (While married, he taught calligraphy; his former students included Apple founder Steve Jobs.)  Father Palladino has a particular fondness for the Gregorian chant he sang as a youth.  Portland is led by Archbishop Alexander Sample, an orthodox bishop with a fondness for the traditional liturgy.

Music St. Stephen is home to Cantores in Ecclesia (www.cantoresinecclesia.org), which sings Gregorian chant and polyphony for the Latin liturgy.

Fellow parishioners This is an English-speaking community in an established neighborhood, located three blocks from busy Hawthorne Blvd.

School No, the school has closed.  The school building on the grounds has been leased to a daycare/preschool.

Parking Park in the lot behind the church or on the street.