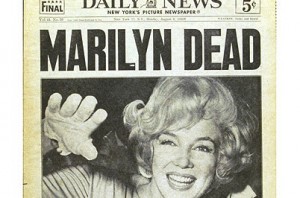 The following comes from a Nov. 11 posting on AlexSchadenbergBlogspot originally written by Margaret Dore, president of Choice is an Illusion.

It is well established that a single suicide can encourage other suicides, which is called a “suicide contagion.” If the additional suicides use the same method, they are “copy cat” suicides. Moreover, as explained below, this encouragement phenomenon is relevant to Compassion & Choices’ media campaign.

A famous example of a suicide contagion is the suicide death of Marilyn Monroe, which inspired an increase in other suicides. This encouragement phenomenon can also occur when the inspiring death is not a suicide. An example is the televised execution of Saddam Hussein, which led to suicide deaths of children worldwide. An NBC News article begins:

“The boys’ deaths – scattered in the United States, in Yemen, in Turkey and elsewhere in seemingly isolated horror – had one thing in common: They hanged themselves after watching televised images of Saddam Husseins’ execution.”

Groups such as the National Institute of Health and the World Health Organization have developed guidelines for reporting suicide to prevent suicide contagions. Important points include that the risk of additional suicides increases “when the story explicitly describes the suicide method, uses dramatic/graphic headlines or images, and repeated/extensive coverage.”

The media campaign by Compassion & Choices, to promote the suicide of Ms. Maynard, violated and continues to violate all of these guidelines. We were told of the planned method, when and where it would take place and who would be there. There was and is repeated extensive coverage in multiple media. With this situation, the risk of suicide contagion associated with Compassion & Choices’ media campaign is real. Moreover, in Oregon, where Compassion & Choices has already run similar, but smaller media promotions, there is statistical evidence suggesting, but not proving, a suicide contagion.