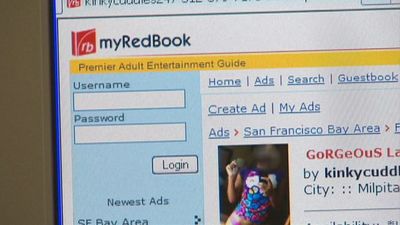 The following comes from a July 29 story on Reuters.

But she dreams of a future when she won’t be treated like a criminal and could earn a little respect in the city that launched the fight for sex worker rights 41 years ago.

Calls by Bay Area sex workers for decriminalizing “consensual” prostitution have been spurred anew following the FBI seizure of a West Coast sex services website that prosecutors say hooked up clients with prostitutes and which sex workers saw as a vital forum to screen dangerous clients.

The shutdown in June of website myredbook.com left local sex workers scrambling for business and worried about their safety. It drove them to launch new Web forums as they seek independence from pimps, traffickers and intimidating customers.

The famously tolerant San Francisco Bay Area would seem like an easy battleground for amending prostitution laws. The fight for sex worker rights was first launched in the United States in San Francisco in 1973 by feminist and self-described prostitute Margo St. James with the organization COYOTE, “Call Off Your Old Tired Ethics.”

In the mid-1970s, COYOTE got prostitution in Rhode Island reduced to a misdemeanor crime, until 2009.

But the battle in San Francisco has lost ground in recent years in the face of the increasing influence of religious conservatives, continued opposition by some feminists and the repeated link made by law enforcement between prostitution and sex trafficking of children and immigrants, activists say.

Sex workers argue that decriminalizing prostitution would be the best way to fight trafficking by ending the black market, and giving women the ability to report crimes against them.

Myredbook.com hosted coded customer reviews and advertisements for sexual services, according to prosecutors, and its operators have been charged with facilitating prostitution.

The website was linked to mypinkbook, where sex workers shared information about violent clients, health and financial concerns, and community resources.