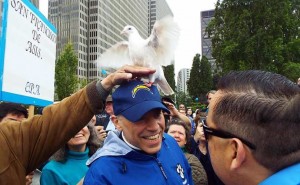 The following comes from a June 9 LifeSite News article by Lisa Bourne:

Inviting faculty to be part of the process, and also taking responsibility for previously upsetting some people, the archbishop said he needed another method to achieve the goal of definitively proclaiming Catholic identity for the sake of young people attending archdiocesan high schools, and on June 1 he released a revised version of proposed handbook language.

“This rewrite has been well received by a large number of faculty teaching in the Archdiocesan high schools,” Archdiocese of San Francisco Vicar for Administration Father John Piderit told LifeSiteNews.

The proposed language has been one part of the controversy in San Francisco over the last several months stemming from some residents upset over the archbishop’s effort to reinforce Catholic identity and principles in archdiocesan high schools.

“The archbishop decided to change the addendum language because he acknowledged that the original language was written in a short-hand form, intended for those familiar with the teachings expressed in the Catechism of the Catholic Church,” Father Piderit told LifeSiteNews. “For people not familiar with Catholic dogma or theology or the structure of the Catechism, the language appeared insensitive.”

Father Piderit maintained that while taking a more pastoral tone, the new documents do not compromise on Catholic teaching. “None of the doctrines were watered down in the new version of the Addendum,” he told LifeSiteNews. “It is still the teaching of the Catholic Church.”

While a new draft document for the handbook language has been released, teacher contract negotiations are still in progress, Father Piderit said, and are nearing an end. Some found the terms “minister” and “ministry” that had originally been part of the proposed new contract clauses upsetting, and they are now not part of the suggested contract language.

“Clearly, the Archbishop feels that one can express well the central core of a Catholic school without having to use these words,” said Father Piderit.

In addition to a more pastoral tone, the new language also gives a more comprehensive view of Church teaching than the initial focus on sexual morality. Another goal with the document, the archbishop said, will be to give teachers a more profound understanding of Church doctrine.

“I have also begun discussions on finding ways to offer you, our teachers, opportunities to understand more deeply the truths the Church teaches, to help you better understand the ‘what’ and, especially, the ‘why’ of the full range of Church teaching,” Archbishop Cordileone said. “The document which is eventually finalized could possibly serve as a basis for how this will be done.”

Originally set to go into effect with the coming school year, work on the new proposed handbook language will instead extend into the school year, with an emphasis made on taking ample time and giving teachers the opportunity to study it and give feedback.