Molly: No. I grew up Lutheran and I was maybe fifteen when I stop going to church with my family. It was mostly because the church came out with their views on LGBTQ people and it just didn’t align with my family because they were anti and we were like, “That doesn’t really align with us.” So we stopped going. I think people should be able to marry whoever they want to and that shouldn’t be constrained by the church.

Do you believe in any sort of higher being?

Molly: I haven’t really thought about it in a long time. I think I do. I feel like it’s something I’m putting off thinking about until after school.

Molly: I’m personally pro-choice. I would say that yes, there are definitely times during a pregnancy where maybe a woman should definitely give birth to the child. Like if it was their fault, they didn’t use a contraceptive or whatever. But then there are other times where the woman could be a victim of rape, there could be extenuating health circumstances, so I definitely think it should be left up to the woman.

It sounds like you agree that abortion kills a baby?

Molly: Sure, sure. But I do ultimately think it is the woman’s choice.

The law restricts our choices by prohibiting drunk driving and killing two-year-olds. Why are those restrictions okay but restricting abortion is not?

Molly: I just think that when it comes down to a woman and her choice to get an abortion, it’s ultimately her body. Once the child is out and about there is a change. At what time that happens, I personally haven’t decided. I think it’s really nuanced. There are so many factors that go into it.

If someone asked you, “Who’s Jesus?” What would you say?

Molly: I think from what I remember and what was believed in my church, Jesus was a savior. He was Someone Who was sent by God and They are the same person, called the Holy Trinity, and that He came to save us, like absolve us from our sins. 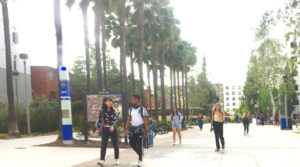 Henry: Yes, I do, but I don’t necessarily think I live differently than other people who don’t believe in God. Some people are benevolent just because they’re just awesome people, whatever their sexual orientation. Some of the coolest dudes I’ve met are homosexual and I don’t mind them choking me out when we’re doing jiu-jitsu and stuff like that. I think it’s awesome. But there’s been certain factors that I feel like some kind of entity has saved me. Especially when I put myself in really stupid situations where I probably should have been severely injured or something. I had a twin brother who passed away from cancer. I was only like six years old so I was like, “Oh my God, my best friend’s gone. Why would God do this to me?” I put myself in really dangerous situations in the military because I was like, maybe I could die here, I could be a hero. But Hanky wouldn’t let me go. That’s another big reason why I feel like, oh this is really neat. Maybe Hanky, my angel, is always looking after me. I used to be an ugly duckling so that’s why I’m camera shy.

If an atheist asked you why you believe in God, what would you say?

Henry: I am diagnosed with PTSD from my military past career, so I was actually suicidal. I loaded my gun and I looked into the barrel. From there I just realized, oh my gosh, how did it come to this? How could I get to this super low point? I dropped the gun and I turned myself in to the hospital and they put me in psychiatric care. We went to church, too, and I literally saw the letters lift off the page and were in like this golden light. Call it crazy, but that’s what I saw. I don’t recall the exact words. Now I don’t know if God is an alien or if it’s some dude with really cool hair, but I think it’s just silly to not accept it. We think we’re so smart but we know that we haven’t discovered everything.

If someone asked you, “Who’s Jesus? What would you say?

Henry: Jesus can really help you, can uplift you from whatever trials you may be facing, give your pain up. My mom always says, “Just give your pain to God because He saved you. I know you miss your twin brother but just keep going because Hanky wouldn’t want you to be alone. He’s protected you so many times.” Whether it was my deployment to Iraq or just being a dumb kid starting fights with people because I was resentful towards the entire world and wondering why would this happen to me. If God exists, why would He take my best friend, my soulmate away from me. But in a sense He did save me, because if I didn’t believe in God, I would have killed myself. Because if I didn’t believe that eternal fire is waiting for me because that’s one of the most selfish things. Supposedly Jesus gave you the blessing of life so you don’t want to waste it. You want to uplift people around you and just try to be positive.

Marc: Somewhat. I do believe in God. I just don’t practice it as much as I probably should, meaning I don’t really attend church often. When I do go, I go to Our Lady of Guadalupe Church.

If an atheist asked you why you believe in God what would you say?

Marc: I’ve made a lot of bad decisions in my past, well, I still do, but I think it was worse back then, and there’s been a lot of situations where I shouldn’t have made it out. So if there isn’t a God or anything like that, I just feel like there’s way too many close calls. There’s Somebody helping me out because, if it was just me, I wouldn’t even be here at this college.

Christians traditionally believe marriage is between one man and one woman only – do you agree with that?

Marc: If you had asked me that around a year ago, or two, I would have been pretty on that. Now one of my closest friends is gay. That’s kind of softened that sort of mentality. Traditionally married by a church probably not, but legally I guess. They can do it by themselves if they want. But I think church marriage, I think that still should be between a male and a female. It definitely would be weird if you went to a marriage in the church between two of the same sex. I’m sorry, I’m giving you answers that are not direct answers. No one’s asked me those types of things before. This is my first time formulating those kinds of answers.

Christians traditionally oppose abortion. What do you think about abortion?

Marc: That one’s a bit conflicted for me because I really don’t think it’s right to just eliminate a child’s life. I’ve known people personally who just aborted their babies because for the most part it was just inconvenient for them. They were going to school, they had jobs, they had a career they wanted to go through and if they had a child they would have to leave school. I would say that’s kind of a no for me.

Marc: Yeah. What you’ve done, I guess, is what dictates what afterlife you get. There might be a definitive heaven or hell. There might be a definitive heaven, purgatory, then hell, a middle ground. Or maybe the same thing, just better. But I do think there’s an afterlife because in past houses where I’ve lived there’s been a lot of paranormal activity. After those I really did believe in ghosts and stuff. I never physically saw a ghost but we saw what were like shadows on the walls of people, more like silhouettes, not the actual ghosts. That kind of freaked us out the first time. The second time in my other house, since we knew that those kinds of things existed, we just put it aside. Acknowledged their existence basically. That’s why I think there is an afterlife.