Same sex marriage: the Church and the controversy 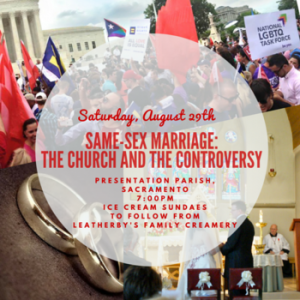 The following event, Same sex marriage: the Church and the controversy, is posted on the Diocese of Sacramento’s website:

While many are praising the U.S. Supreme Court’s decision redefining marriage as a victory for love and tolerance, the Catholic Church maintains that marriage will always be – and can only be – between one man and one woman.   Does that mean our Church is out of touch, stupid or unloving?

Join Catholic Answers apologist Trent Horn who will help us – especially high school teens and their parents – understand why the Church’s views and teachings on marriage are:

◦ Compassionate and reasonable
◦ Not hateful or bigoted
◦ In keeping with our nature as men and woman
◦ The best thing for children
◦
Our speaker Trent Horn is an apologist and speaker for Catholic Answers, an apostolate that is dedicated to explaining and defending the Catholic faith. He specializes in teaching Catholics how to graciously defend their faith with sound arguments and persuasive communication techniques. He currently lives with his wife and son in San Diego.

The following is from an August 2 Catholic News Agency article by Kevin J. Jones:

Dignity USA on July 5 announced support for “full access to marriage and ordination” in the Catholic Church. The group’s annual convention, held in Seattle, approved a resolution that said Catholic leaders should “ensure that all of the sacraments of our Church be administered regardless of the gender identity, sexual orientation, or relational status of the person(s) seeking the sacrament.”

“We can’t be fully equal if we are barred from any of our Church’s sacraments,” she said. Her statement cited the U.S. Supreme Court’s recognition of civil same-sex marriage in June as a precedent for cultural change.

Elk Stanley, senior legal counsel with the legal group Alliance Defending Freedom, said that Catholic individuals and organizations can face can face lawsuits and other threats due to non-discrimination laws and ordinances regarding employment and places of public accommodation.

But he did not think Dignity USA’s position would pose a problem for the legal defense of Catholic groups or individuals that support Catholic teaching.

“It is difficult to predict what will sway judges, regulators, or legislators,” Stanley said. “Legislators and others have attempted to cite churches that have left the evangelical Protestant teaching on marriage as proof that churches are changing their ways. But this is probably less of a concern for the Catholic Church which has been clear for hundreds of years regarding its doctrine as it relates to marriage and human sexuality.”

“Absent a change from the leadership of the Catholic Church on these issues, the voice of one dissident group will not likely be attributed as Catholic church doctrine,” Stanley told Catholic News Agency July 29.

Dr. John Grabowski, a professor of moral theology at Catholic University of America, saw the move to change marriage in the Catholic Church as a consequence of the June 2015 U.S. Supreme Court decision. However, he said it also reflects cultural trends dating back five or six decades. Contraception and no-fault divorce already represented a cultural definition of marriage.

Both groups are part of the Equally Blessed Coalition. Their financial backers include the Arcus Foundation, which gave the coalition a $200,000 grant intended “to support pro-LGBT faith advocates to influence and counter the narrative of the Catholic Church and its ultra-conservative affiliates.” The advocacy efforts are connected with the Synod on the Family and World Youth Day, according to the grant listing on the foundation’s website.

When the city is one big singles barMarriage, though it might be imperfect, is better than no marriage at all

When the city is one big singles bar
Marriage, though it might be imperfect, is better than no marriage at all