Rome reins in kiss of peace 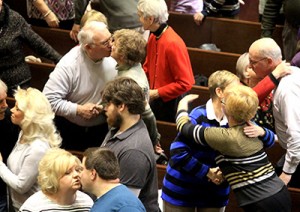 The following comes from a July 31 Catholic News Agency story.

The Congregation for Divine Worship, in a recent circular letter, announced that the placement of the sign of peace within Mass will not change, though it suggested several ways the rite could be performed with greater dignity.

“The Congregation for Divine Worship and the Discipline of the Sacraments … pronounced in favor of maintaining the ‘rite’ and ‘sign’ of peace in the place it has now in the Ordinary of the Mass,” Fr. Jose Maria Gil Tamayo, secretary general of the Spanish bishops’ conference, related in a July 28 memo.

He noted that this was done out of consideration of the placement of the rite of peace as “a characteristic of the Roman rite,” and “not believing it to be suitable for the faithful to introduce structural changes in the Eucharistic Celebration, at this time.”
…The congregation offered four suggestions which are to form the “nucleus” of catechesis on the sign of peace.

First, while confirming the importance of the rite, it emphasized that “it is completely legitimate to affirm that it is not necessary to invite ‘mechanistically’ to exchange (the sign of) peace.” The rite is optional, the congregation reminded, and there certainly are times and places where it is not fitting.

Its second recommendation was that as translations are made of the third typical edition of the Roman Missal, bishops’ conference should consider “changing the way in which the exchange of peace is made.” It suggested in particular that “familiar and worldly gestures of greeting” should be substituted with “other, more appropriate gestures.”

The congregation for worship also noted that there are several abuses of the rite which are to be stopped: the introduction of a “song of peace,” which does not exist in the Roman rite; the faithful moving from their place to exchange the sign; the priest leaving the altar to exchange the sign with the faithful; and when, at occasions such as weddings or funerals, it becomes an occasion for congratulations or condolences.

The Congregation for Divine Worship’s final exhortation was that episcopal conferences prepare liturgical catechesis on the significance of the rite of peace, and its correct observation….