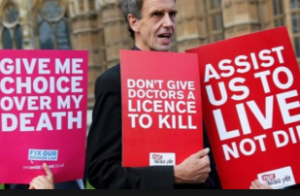 The following came in a June 8 email from a correspondent of Cal Catholic.

In an eleventh hour effort to prevent assisted suicide from being legalized in California, the Life Legal Defense Foundation filed for a temporary restraining order on Wednesday in Riverside Superior Court. Assisted suicide is to go in effect today, June 9.

Rather than being a new law, the California bill merely creates exceptions within the current murder and suicide statutes for those diagnosed with a “terminal disease.” The Civil Rights lawsuit was filed by five physicians on behalf of their patients and by the American Academy of Medical Ethics, which represents more than 600 California doctors and over 2 million patients. The End of Life Options Act removes criminal law, elder abuse, and mental-health legal protections from anyone deemed with “terminal disease.”

Under the Act, a “terminal disease” includes any condition that, if left untreated, would, in the opinion of two doctors, cause death within six months. Included in today’s filing were declarations from multiple physicians attesting to the fact that predicting life expectancy is subjective and fraught with error. The act’s definition of “terminal disease” includes conditions which might be successfully treated.

In contrast, those without a “terminal disease” are protected by Penal Code Section 401, which makes it a felony to aid, advise, or encourage another to commit suicide. Healthier individuals who express a wish to take their own lives may be placed on a 3 to 30-day mental health hold to prevent them from self-harm.

“We are asking the court to uphold civil and criminal laws that should apply equally to all Californians, including laws that protect people from self-harm and elder abuse laws. The End of Life Option Act is irreparably flawed as it removes crucial protections from individuals who are most susceptible to depression, abuse, and coercion,” said Alexandra Snyder, executive director of the Life Legal Defense Foundation. “The act provides virtually no safeguards for labeled individuals who may suffer from untreated mental illness or mood disorders and grants full immunity for doctors to participate in the killing of their most vulnerable patients.”

The End of Life Options Act has no safeguard against those with untreated depression or mental illness acquiring a lethal prescription. Individuals with a “terminal disease” who seek “assistance” in dying are not required to undergo a psychiatric evaluation. The physician prescribing the lethal dose need not have had any prior relationship with the patient.

Opponents of the act also argue that an individual who asks for a lethal prescription “for peace of mind,” as proponents say,  may leave the drugs accessible for someone else to poison the patient in an untraceable crime. There is also a danger of the patient who receives the lethal drugs feeling temporarily depressed and ending his or her life simply because the means are at hand.

Life Legal appeared in Riverside Superior Court on Wednesday morning to ask for a temporary restraining order and ultimately, a permanent injunction.