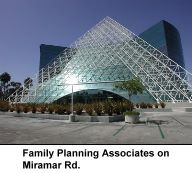 The following is from an August 16 email from Helpers of Gods Precious Infants San Diego:

Please pray for 2, possibly 3 turn-arounds we had on Saturday, August 15, feast day of the Assumption, at Family Planning Associates on Miramar Road.

The first hour in the morning was busy.  By 9:00 we had 9 counselors in the parking lot.  The pro-choice escorts all wear yellow shirts with large black letters that say “Patient Escort”.  There were between 5 and 7 of them throughout the morning, and they were aggressive as usual, often trying to block us as we approached the car.  The security guard was also trying hard to stop us when we came close to the first row of cars in front of the building.

Two women in their early 20’s entered the lot.  Two counselors approached the car at the same time as 2 or 3 escorts, who tried to interrupt our conversation by telling the women that we have to go away if they tell us to leave them alone.  Despite this, the women continued to listen to us cautiously, but when one of the escorts said “We can escort you upstairs”, and motioned for them to go, they started walking to the clinic, sandwiched between two escorts who were trying to separate us from them.  However, together with a third counselor, we managed to give them some flyers and show them a picture of an ambulance that had to take a patient to the emergency room earlier this year.  They went upstairs, but within less than 30 minutes, they came back downstairs and drove away.

A little later, a car drove into the lot, and a counselor handed the driver some information through the window of the car, before the guard came over and told them they had to move.  The car drove to the back side of the lot, where the counselor followed them over to continue the conversation.  Two escorts rushed over and walked up next to the counselor.  They told the people through the car window that they did not need to listen to the counselor, and that if they told us to leave, we would be required to go away.  However, the man and woman in the car said that they wanted to talk to the counselor, so the escorts walked away.  After about 10 minutes of listening to the counselor, they drove away, but came back a short time later and went into the clinic.

One of the counselors spoke to another couple briefly.  They went upstairs, but came back down about 30 to 45 minutes later.  One of the counselors talked to the couple as they entered the car, and the husband told the counselor that his wife was still pregnant.  However, she did not look happy.  Sometimes when a woman chooses not to have an abortion, it is a joyful relief to her, while other times it is a somber moment, as the difficulties that will follow weigh heavy, particularly if she was the one that wanted the abortion.  We do not know why the couple had left.  Please pray that they continue to reject the ideal of abortion, and choose life instead.

Another woman who had gone upstairs to the clinic earlier in the morning came out and chose life.  We did not get a chance to talk to this woman going in, but she indicated to someone that she was not going to have the abortion.