On Saturday, April 25, the 4:30 p.m. Mass at San Francisco’s Star of the Sea Church resembled Easter or Christmas.

The packed Church was a show of support for Star’s faithful Catholic Priests, Father Joseph Illo and Father Patrick Driscoll. The two have earned the enmity of the San Francisco power structure, as well as that of a number of their fellow priests, for their decision to only allow boys to serve at the altar. That decision is at the discretion of each parish’s pastor—at Star of the Sea, Fr. Illo.

The anti-Catholic San Francisco Chronicle has done a number of hit pieces on Fr. Illo, resulting in his now being one of the best known priests in San Francisco. The enormous turnout on Saturday was the result of a grass roots “flash mob” effort to make sure Fr. Illo, and the wider world, knows that there are thousands of faithful Catholics who support him. One of the nice and notable things at the Mass was the very large number of babies.

The Mass was celebrated by Fr. Illo, and was concelebrated by Fr. Piers Lahey, a former Associate Pastor at Star, and the young Fr. Corwin Low, OP. As Mass began, a line of people were still waiting outside the confessional, where Fr. Driscoll was administering the sacrament of penance. 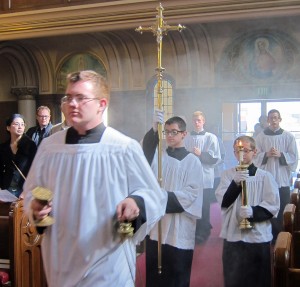 Before beginning his homily Fr. Illo thanked the hundreds of the faithful in the pews. He said he had been to a few flash mobs before, but “I’ve never been to a flash Mass….I don’t know whether to call you a Flash Mass or a Mass Mob!”” He began his homily by reminding the faithful that the day was Good Shepherd Sunday, but also World Day of Prayer for Vocations. He unified the two subjects immediately. As priests, he said, “We have to hear and respond to that voice, for the rest of our lives…I know as a priest we have to keep saying ‘yes’ to those vows. 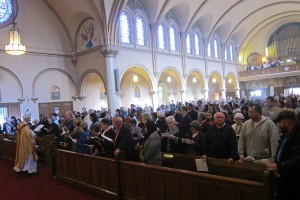 As priests, he continued, “we have to throw our life away for those we love” secure in the knowledge that “the Supreme Shepherd will give it back.” The Church, he said “gives pastoral office to men–Bishops, Priests” and they must be “Christlike shepherds who die for their sheep.” But, he stressed, their lives are not taken from them, as Jesus said “I give it freely as a gift…This is the way it must be with Priests…we are tempted to be worldly: bodily health, plenty of money… but the priesthood calls man to see beyond this world.” He remarked with good-natured irritation on how well-meaning people sometimes express sadness that he could not marry. Priests, he said, “must be ‘other Christs’ wedded to Christ and the whole Church…we must pray always, and know the voice of God. We should not pray for life to be easier, though, we must be strong.” Given the trials Fr. Illo has faced in the past few months his words carried both poignancy and a rock-solid credibility.

Jesus, he said, was “more than a spiritual healer, more than a moral example.” Jesus was those things, he said, but He was “fundamentally a victim. His victimhood set him apart.” Priests, he said, must be the same, and again Fr. Illo’s recent experiences gave a special weight to his words.

Fr. Illo closed the homily with a prayer to the Church’s patroness: “We must pray God give us humility, clarity, and strength….only the Word of God can prepare us for martyrdom. All priests must be prepared for martyrdom. Most won’t face it but all must be ready. At that time we must turn to Our Lady, who was ready to take Jesus’s place on the cross. She was ready to die. Star of the Sea, cause of our grace, Star of our troubled seas, intercede for us!”