Not just a blob of tissue 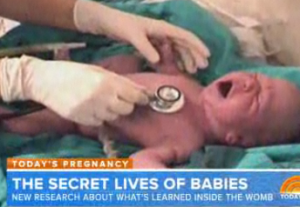 The following comes from a July 31 story by A. Pawlowski on the website of the Today Show.

Little ones spend nine months growing in the womb and what they experience in there is still a bit of a mystery. It’s hard for doctors to test what babies are doing and learning as they hang out inside mom.

Life in the womb is much busier than you might expect, said Dr. Bill Fifer, a professor of psychiatry at Columbia University and a leading expert on fetal and newborn learning.

“Everything that a newborn baby does, a fetus has pretty much done already,” Fifer said.

“They’re exquisitely able to sense information over all parts of their body, although some are more sensitive than others, like around the mouth, around the feet, around the hands.”

Moving around: Experts say kicking and other activity can be a reaction to mom eating or changing positions; or it might happen just because the baby feels like moving around. 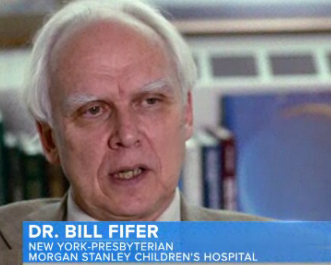 Mom’s emotions can also cause certain movements. The more stress pregnant women reported, the more frequently their fetuses touched their faces with their left hands, researchers at Durham and Lancaster universities in the UK announced last month. Their study was published in the journal “Laterality: Asymmetries of Body, Brain and Cognition.”

Babies appear to recognize nursery rhymes even before they are born, according to a recent study published in the journal “Infant Behavior and Development.” University of Florida researchers asked pregnant women in their third trimester to read classic verses to their bellies twice a day for several weeks.

In utero, the baby’s heart rate slowed when the rhyme was read by mom and continued to lower even when a stranger’s voice took over story time a few weeks later.

A baby’s ears are fully formed about halfway through pregnancy, which means children may know their mom’s voice by the time they’re born.

“Prenatally, it’s got this extra boost by the fact that it’s coming in through the whole body,” said Dr. Christine Moon, an affiliate associate professor at the University of Washington who studies babies’ voice recognition. She found that when hours-old newborns are given a pacifier to suck on while hearing a recording of their mother’s voice, they will suck faster, suggesting familiarity….

“Nature provides pretty much all the sources of stimulation that a baby is going to need,” Fifer said.