Not all Christian haters are equal 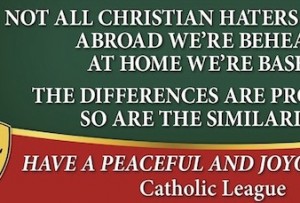 The following comes from a Dec. 8 story with the Catholic News Agency.

A new billboard campaign in Los Angeles leading up to Christmas is hoping to raise awareness of persecuted Christians both locally and around the world.

The Catholic League, a Catholic civil rights organization, has sponsored a Christmas billboard displayed in Los Angeles. Last year, the group sponsored a New York City billboard, and this year, it hopes to make its mark on the culture right outside of Hollywood.

“For the past several years, we’ve been engaged in a battle of the billboards with our atheist foes at Christmastime,” stated Bill Donohue, president of the Catholic League, in a Dec. 3 press release.

The large, illuminated billboard sits on Pico Boulevard, just west of Fairfax Avenue, one of the most heavily traveled East-West routes in Los Angeles. The Catholic League hopes to target the traffic between Century City and downtown Los Angeles.

The Catholic League’s message on the billboard reads:

“Not all Christian haters are equal:
Abroad we’re beheaded
At home we’re bashed.
The differences are profound;
So are the similarities.
Have a peaceful and joyous Christmas.”

The billboard will be on display until Dec. 28, and the organization says it hopes to highlight the reality of persecuted Christians domestic and abroad – emphasizing that any kind of religious discrimination is unacceptable.

“No, the Hollywood moguls who disrespect Christians are not the same as radical Muslims who behead us, but both are full of hate,” Donohue stated.

“Christians are fed up with the barbarians abroad and the bigots at home,” he continued, saying that “it’s time all these bullies learned to practice the virtue of tolerance and the meaning of diversity.”

To read the original version of the story, click here.