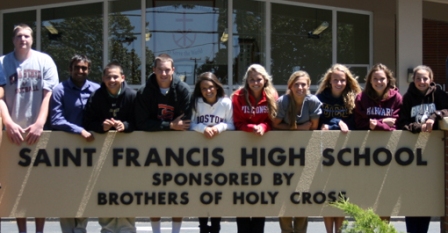 The following comes from a November 21 Valley Catholic article:

The Saint Francis High School community is doing its part to curb its thirst for bottled water. Students, faculty and staff are taking part in a new school initiative to eliminate the use of plastic water bottles on campus.

As bottled water is no longer sold by the school’s food service, students and employees have been encouraged to bring their own reusable bottles. Water filling stations have been installed in the school cafeteria.

Campus Ministry and the science department worked jointly to roll out the initiative and make the school community aware of the significant environmental, economic and health costs that plastic bottles carry. Last year, 57,500 bottles of water were sold on campus, and champions behind the school-wide measure are confident that decreasing this amount of plastic waste is an important move toward helping the environment.

“We can’t change the world in one day, but we can change our own little corner of the world,” said Father Steve Kim, director of Campus Ministry.

The initiative is a direct response to the all-school summer reading book, “The Sixth Extinction,” in which humans are called “a weedy species,” and Pope Francis’ challenge for all citizens of the planet to be better stewards of the environment and to combat the throwaway mentality–as laid out in his encyclical Laudato Si’.

“Teachers were interested in a project that could keep the issue of environmentalism visible on campus throughout the year, and this is a step in helping us engage with the Pope’s call to be environmental stewards,” said science department chair Jen Thomas.

The attention to bottled water is in line with the many steps Saint Francis has already taken toward environmental sustainability. Recent actions include installing four electric car chargers and replacing grass fields with 200,000 square feet of artificial turf.