Nancy Pelosi tells us what Pope Francis wants us to do 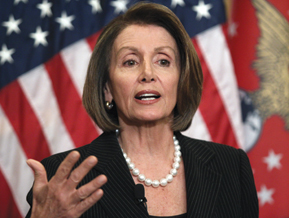 The following comes from an October 22 CNS News article by Lauretta Brown:

“Republicans are moving forward with a GOP reconciliation package that once again lays the groundwork for another Republican government shutdown. It’s a waste of time. It will go nowhere in the Senate,” Pelosi said.

“It doesn’t have to be this way,” Pelosi emphasized. “Instead we could be working together recognizing a Republican Congress, a Democratic president, the ability for Democrats to use their leverage legislatively to have compromise for the good of the American people. That’s what Pope Francis told us to do.

“He said leaders should have transparency. That would be wonderful – openness, he said. He used the word openness and pragmatism, and he said we have to move forward for the good of the people. Let’s in the spirit of Francis do that,” she added.

Pelosi was referencing the Pope’s September 24th speech before Congress in which he praised “openness and pragmatism” as qualities of a good leader, although it was in the context of countries resuming dialogue.

Pelosi cited these same words of Pope Francis, again in relation to avoiding a government shutdown, in an interview with MSNBC’s Andrea Mitchell shortly after the pope’s September visit.

“His Holiness gave us good guidance – to be in dialogue – that was the message of Saint Thomas Merton, of Thomas Merton, in terms of dialogue – find a path, go forward … make progress, go forward … respect other people’s views, and come to solutions that do just that,” Pelosi told Mitchell. “So, I feel quite certain that we’ll keep government open, because it’s the right thing to do.