My heart is bleeding

On Saturday, August 2, more than 2,000 Christians gathered in San Francisco’s Justin Herman Plaza. The rally was one part of the worldwide day of protest to call attention to the plight of the Christian community in Iraq. Iraq’s Christians are now faced with a deadly choice: convert to Islam, leave their ancient home, or be murdered. The San Francisco protest joined others  in Canada, London, Australia, Denmark, France, and other locations in the U.S. In Los Angeles several hundred protestors gathered in front of the Federal Building.  The majority of the San Francisco protesters were American Assyrian Christians, and many carried or wore Assyrian flags, along with the stars and stripes, The now world-famous Arabic letter “nun” was everywhere. “Nun,” Arabic for the letter “n,” stands for Nazarenes, that is Christians. In a gruesome echo of the original Passover, the ISIS/ISIL terrorists, who now control large parts of Northern Iraq and parts of Syria, have been painted the letter on the doors of Iraqi Christians, marking them for extermination. ISIS stands for the Islamic State in Iraq and Syria.

“I’m burning for our history, our people…my heart is bleeding” said Remouz Malek-Zadeh, an Assyrian Christian, now living in the United States.

The rally began with an invocation by His Grace Mar Awa Royel, the California bishop of the Holy Apostolic Catholic Assyrian Church of the East. Bishop Royel was followed by Republican Congressman Jeff Denham, who represents California’s 10th District. Denham’s district includes 25,000 Assyrian Christians. The congressman urged Democrats and Republicans to put aside differences they might have and to address the catastrophe, and to stop funding the Iraqi government until it takes steps to protect its people. Congressman Denham joins his colleague Frank Wolf (R-Va.) who said last Thursday “I believe what is happening to the Christian community in Iraq is genocide. I also believe it is a crime against humanity…Where is the West? Where is the Obama administration? Where is the Congress? The silence is deafening.”

Some movement may finally be happening. What the Assyrian Christians are hoping for is the establishment of a U.N. protected safe haven on Iraq’s Ninevah plain. A chant at the San Francisco rally, and all the rallies worldwide, was “Safe Haven NOW!”  On August 2, the House of Representatives unanimously passed House Resolution 683 “Expressing the sense of the House of Representatives on the current situation in Iraq and the urgent need to protect religious minorities from persecution from the Sunni Islamist insurgent and terrorist group the Islamic State in Iraq and Levant as it expands its control over areas in northwestern Iraq.”

But more than a resolution is needed, and the rallies will continue. Further, the silence is not restricted to the halls of Congress. The San Francisco Chronicle gave zero coverage to the demonstration, although a rally of similar size on Sunday, August 3, in support of Israel, was front-page news. The only local mainstream media outlet to even mention the event was KTVU TV, San Francisco’s Fox affiliate, which had done a short story on the upcoming event last Wednesday.

The lack of coverage is not unique to San Francisco: Gary Fouse, who covered the Los Angeles rally wrote “Again and again, (the Christian protestors) asked why the world, the media, and President Obama were ignoring their plight.”   The demonstrators, particularly the young, are using social media to do an end run around the mass media’s negligence. A young speakers at the San Francisco rally said “Everyone of you here today must use social media to get our message out!” 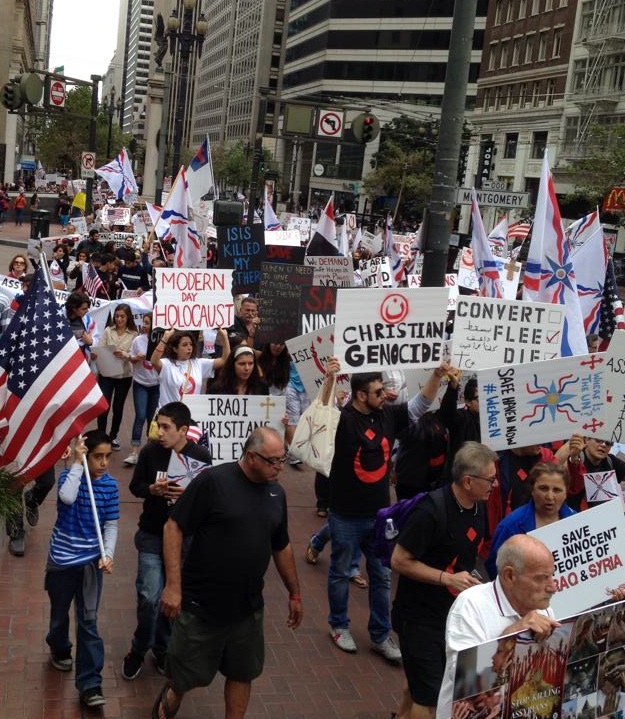 Although Latin Rite Catholics were present at the event, Catholic clergy were noticeable by their absence. The only clergy in attendance that CalCatholic saw were Deacon Dominick Peloso, of Menlo Park’s Church of the Nativity and pro-life veteran Sister Ignatius, RSHM. The Latin Catholic lay presence was better: Dolores Meehan and Kelly Connelly, co-founders of the Walk for Life West Coast were there, joined by other volunteers from the Walk;  Franco Reguzzoni, a language teacher from De La Salle High School in Concord; a group of parishioners from San Francisco’s Saints Peter and Paul Church.

(Note: A commenter to this article  informed us that Fr. Awraha Mansoor, the Episcopal Vicar to the Northern Vicarate of St. Peter’s Chaldean Catholic Diocese, and Fr. Potrus (Peter) Georgis, were also present.)

Following the rally, Bishop Royel and other clergy led the demonstrators on a march to Union Square, in the center of San Francisco’s downtown. The Latin Rite Catholics carried a papal flag with the now-famous “We Are N” sign affixed.  The march was greeted by thumbs-up signs from pedestrians and supportive honks from drivers.

The Assyrian Christians of the diaspora will continue to be a voice for those suffering persecution in Iraq. On Friday, August 8, at 11:30AM, there will be another demonstration at San Francisco’s U.N. Plaza.