Interview with Caroline, who is studying music and art, took place near the Library Learning Resources building at Moorpark College on April 3, 2019.

Caroline: No. I believe in stuff, I just don’t consider myself religious. I feel like religion is a set of rules that you have to follow in order to believe something and I think it’s kind of toxic. I believe in God and I do believe in, like, Jesus, but I also believe in a lot of other things so I never know if I should call myself Christian or not. There’s a lot of things that Christians believe that I don’t believe and it just kind of makes me nervous. Like reincarnation, they don’t believe in that. I believe in ghosts, too, because I’ve seen some weird s*** but they think that ghosts don’t exist, only demons exist. I was born with psychic abilities and they would think that that’s demonic. They have rules like, “Oh gay marriage is a sin,” that type of thing where you have to believe certain things or disbelieve other things in order to be quote a good Christian and I don’t like that. I’m not like bashing every Christian by the way, I feel like there’s ones that think very similar to me and I have friends that are Christian and they’re very nice people. But there’s certain people, where if you don’t do certain things a certain way, and if you don’t read the entire Bible and if you don’t follow all the rules in it, you’re not a good Christian, you’re going to hell. I don’t believe that stuff. I don’t believe that anyone’s going to go to hell. I mean if you die and you’re not in a happy place it’s because you’re in your own hell and you got to figure that s*** out. I don’t think that you’re going to burn in a pit for being gay. It’s stupid.

What kind of psychic abilities do you have?

Caroline: I’ve seen ghosts and they’ve told me some strange things. It’s not like a full conversation. It’s more like them telling me things and I’m like, “Dude, what?” It’s really weird. This one time there was this lady who had these three kids with her. She was really embarrassed because she was related to this dude but the dude was the kids’ uncle and apparently he killed them somehow. I don’t know how. But she told me that and I was trying to figure out why she was telling me, but then she went away. It was very strange. One time I was watching a murder documentary and that sucked because a little girl that got killed started channeling through me and that was terrifying because that never happened to me before. She was telling me what happened and I was like, “I don’t want to know.” That was scary. My friends who are Christians would be like, “Are you sure it’s not a demon disguised as a ghost?” And I’m like, “Why would that happen?” That doesn’t make sense to me. I don’t believe that people go to hell. I think that when you die, you’re just in the spirit realm and you’re supposed to figure out whatever you have to figure out. Maybe you do go to some sort of Heaven if you need to or something, but I think that if a soul is troubled it will have to rethink things. I also believe in reincarnation. My view on that is whatever you can’t figure out or solve in this life, you have to solve in the next life. So let’s say you have a drug problem and you don’t solve it in this life and you end up like ODing or something. I think in the next life you’ll end up having a drug problem again and, until you get sober and live a life without that, the cycle will just keep happening. 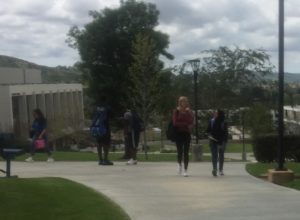 You said you believe in Jesus – what do you mean by that?

Caroline: Well, I lived in a house with a lot of darker entities and, when I was twelve, I started studying the paranormal because I wanted to know what was going on. There was this one show that I watched called “Paranormal State.” It’s people from Penn State who travel across America helping families with paranormal issues. Some were really really creepy. But there was always this one prayer that they said and it protected them. When I was thirteen there was some really really scary s*** going on, and I started saying it. Whatever the entity was would just go away at that moment. It wouldn’t go away completely, but it left me alone for the time being. I was like, “Oh. that’s interesting.” So that kind of taught me, I guess. I still say it because I get scared sometimes: The light of God surrounds me, the love of God upholds me, the power of God protects me. Every time I would say that, everything would just stop. It was cool. I stopped believing in God for a little bit, but the prayer was the only thing that made me think: okay, maybe there is, because that’s the only thing that makes it stop. It was really difficult for me to believe in anything like that or that anything could help. I thought it was really stupid when certain people were like, “God can cure your depression” and I’m like, “Why am I depressed?” Then there were several instances where I was there’s certain things where I was like, oh, maybe I shouldn’t deny this anymore. My friend started taking me to Bible study. There were certain things where I was like, oh, this is beautiful, and other things where I was like, you’re stupid. This one guy was like, “We’re in a battle with Satan. When we forget to pray, it’s because of Satan.” I was like, “Actually, don’t we just forget to pray because we’re busy?” But there were other things that kind of made sense. I’m not ragging on Christians. I firmly believe that God is just love. He’s just like a spirit of love. I don’t think that if there’s Something that created all of us and helps us I don’t think that It would ever hate anything.

Do you think God forbids things because they hurt us, even if we can’t see how?

Caroline: I actually believe that, too. There’s certain ones where it’s obviously stupid. Again, just the gay thing. Like shut f*** up. Shut up. But, other things, I guess I do believe. I do believe that there’s a greater Force out there That really does know what’s best for us and I’ve experienced that. There’s been times where I’d pray for something and it wouldn’t happen. Then I’d realize the way that things turned out was so much better than I could have had it and that if God did answer my prayers in that certain way then I wouldn’t be happy and I would have been in a bad situation. So I do think that that is a thing.