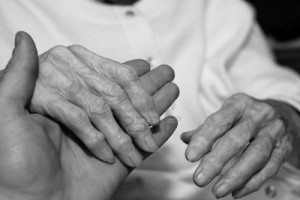 The following comes from a Nov. 5 story on CBS-TV San Francisco.

An Alameda man who said he just wanted to end his wife’s suffering is in jail Wednesday night accused of fatally shooting her, and neighbors insist it was not a murder but a mercy killing.

Neighbors are saying prayers for the loving couple that was once inseparable.  72-year old Joann Canfield was suffering from advanced dementia and had been hurting herself around the house.

Investigators say her husband J.C. Canfield, also 72 turned himself in and confessed to a mercy killing after apparently shooting Joann in the head before leaving roses next to her side.

“He told us that he decided to end his wife’s life to end her suffering.  He said it was something they had spoken about,” Alameda Police Sergeant Rick Bradley told KPIX 5.

“She was running from the monsters she was seeing, so he thought it was best to put her in the nursing home.  And he was really happy to bring her home,” neighbor Bridget Milet said.

JC is also very ill according to those neighbors.

“To hear he did that is sad, but it’s [understandable],” neighbor Rosa Flores said. “She was definitely sick, and he was worried he wouldn’t find anybody else to take care of her if something happened to him.”