Well, the last week has been a good one, but I was definitely beginning to feel a sort of spiritual dryness. My first month here, everything felt so new, and good; there was this peace in knowing that I was going outside of myself, serving others. Then I realized two things: the first was, that the work itself was incredibly emotionally draining. The second was, that even though I wanted to make it about finding Jesus in the poorest of the poor, I was spending an awful lot of time focusing on whether people were noticing me–seeing that I was a great volunteer, or that I did such a good job with the various tasks. And the not very surprising thing is, that’s not a very sustainable way to be. I couldn’t anchor myself on Jesus, when so much of it was focused on myself. 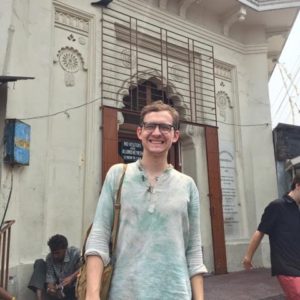 Also, I was exhausted. So I’ve taken a few more afternoons off, and really tried to focus in on the service, tried to remember that the work isn’t about me feeling good. That’s a nice by-product, but it’s not the reason I should be here. Things have been getting better. At the end of the week I’m going to Darjeeling and Sikkim for a week, and I think the physical rest will be a big help as well.

Last Friday, I went to the Indian museum, which is right next to the metro stop I usually take. It costs 500 rupees for foreigners and 20 rupees for Indians, but I finally decided to fork over the $7.75 and just go. It’s a huge white building, basically a big square with a green lawn in the middle. Just inside the entrance, on my right was an amazing display of an ancient Buddhist gate. I can’t remember where exactly it had come from, but it was beautifully carved all over with motifs of birds, flowers and the life of the Buddha. There were also all these weird elephant/fish monsters on it, which were cool.

On Sunday, we (the volunteers and some of the sisters) went on a pilgrimage walk to many of the places mother Teresa worked and prayed in the early years of her work. We started at her tomb, which is in Motherhouse, and then walked down Bose Road to St. Teresa of Avila church, where she would begin her mornings, and had her first dispensary. A few minutes further down the road we got to Creek Lane where she lived and where she had her first convent on the top floor of the Gomes family home. By the time she left there she had 25 sisters living with her. It was amazing to realize that the Missionaries of Charity, which we now see spread all over the world, just began with a nun walking into a slum with one volunteer.

Next we walked to St. Mary’s, where Mother Teresa was the principle for a number of years and to Loreto, where she lived up until she began her work. St. Mary’s is a boarding school for Bengali girls. They let us in to see the classroom where Mother taught. They’ve kept it much like it was when she was there–low wooden desks, which we made the foolish decision of trying to sit at (very tight squeeze)–and a chalkboard. Loreto, which is next door, is big and peaceful, with a pond, a grotto and a big lawn. It’s almost the opposite of the garbage covered street right outside. The sisters of Loreto run schools throughout India for Bengali and Hindi girls. Mother Teresa lived here for 18 years–and as the sisters emphasize–was really happy. None of her fellow sisters had any idea of her special holiness (that she actually heard the voice of Christ for years,) or about her call, until the day she left. I could see why it was such a hard place for her to leave–it felt like an oasis in the desert. We spent an hour in prayer at the chapel there which is very pretty and got to see the sacristy where Father Van Exem blessed Mother Teresa’s sari.

We ended the walk by going through the slum outside Loreto to Mother’s first school, which she started by renting two rooms in a house on the edge of a dump for 5 rupees a month. All along the way, Sister M. read us excerpts from Mother’s diary, which she was commanded to keep by Archbishop Perier. It was moving to remember that she had walked in all these places, had been a nobody to all intents and purposes, in the eyes of everyone.

I’ve been reading “Come be my light.” Mother Teresa has this amazing quote, which you may have all heard before, but I thought it was so awesome I’m going to share it anyway: “in spite of it all [her darkness]–I am His little one–and I love him not for what he gives–but for what He takes…” So. Cool.

With love from India,