How are you all? I miss you guys. Last night I kept having dreams I was back in California sunshine. I hope you’re all doing well! Things are good over here. I’ve been kind of sick for the last week, so I haven’t been volunteering much, but it’s been nice having a little rest. Kolkata is an amazing place, but the constant noise and smell, not to mention all the people, can be a little exhausting. I’m going to be going up to Darjeeling at the end of February, so that should be a nice change. 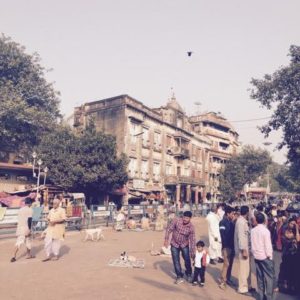 Apart from being sick, things have been very good here. Like I said in my last email, I’ve been working in Kalighat, the house of the dying. Mostly, I try to wash and change a couple of the bedridden patients, and make sure they get turned often enough. I’m also working with one man on getting him to the toilet and with walking. On Wednesday I had the amusing, but simultaneously infuriating, experience of needing to change him about four times in 15 minutes. When we finally did reach the toilet…NOTHING. Sorry, I realize that is probably a little too much information, but I thought it was pretty funny. In retrospect. At the time I wanted to kill myself. Haha.

There are so many funny things about this place, things you wouldn’t particularly expect. One of them is all the stray dogs. There are literally dogs everywhere. Someone said they’re a carry-over from when the British were here and that nobody has tried to do anything about them since then. Whatever the reasons, you see whole families of dogs roaming about the streets scavenging for food. Although obviously it’s not important compared with the human poverty here, it is still a little heart-wrenching to see them.

Another funny thing I’ve noticed here is that many people put eyeshadow on their tiny babies. You’ll be walking along, and suddenly you run into a woman with a tiny baby, with dark eyeshadow. Someone told me that they do this to ward off the evil eye. Apparently they also think it’s good for preventing eye infection. 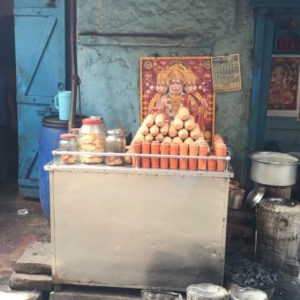 Whenever you ask for directions here, which we did multiple times today while trying to find a restaurant, you suddenly find yourself being helped not only by the one person you ask, but simultaneously by the four other people who have congregated around you. The people are genuinely friendly in such a surprising way. The other night I stopped by a samosa stand: samosas are little potato flour pastries that you fill with sauce and potatoes (filling in general). A very nice, respectable-looking lady saw me eyeing the samosas and asked me if I wanted to try. When I said yes, she explained how it was done, and held my phone and wallet for me while I tried it. You stand in front of the samosa man, with a little tin foil and paper plate which he refills continuously until you’ve had enough. Samosas can be eaten in one bite, so you can have quite a few. After I tried it, I asked the lady how much it was. She told me not to worry about it and insisted on paying for it herself. That’s just one example, but people are just like that in general. The other day while I was walking to Kalighat with a friend another lady asked us if she could take a picture of us with her little baby. She wasn’t begging or anything, she just wanted a photo. It’s hilarious.

Mass here is usually at 6 AM, and since I’ve been sick I haven’t gotten to it every day. Instead I walk down nearby Rippon St, to St. Mary’s, which is only about 10 minute away. It was absolutely packed for Ash Wednesday, and Father gave an awesome homily on the importance of the corporeal and spiritual works of mercy, especially during Lent. The day before, Sister Mercy Maria, who is in charge of volunteers, led a two-hour adoration at Mother House, with a special meditation on the Seven Sorrows of Mary. It was very beautiful. It really got me thinking about the need to unite our sufferings with the Passion of Christ.

This morning I went to breakfast with my friend Valentina at a cafe called 8th Day Cafe. It’s owned by an American man from Flagstaff, and it has a very western vibe. It was SO nice to have regular food and coffee. Our other friend Joe left this morning, so we needed some comfort food. He lives in a Catholic community in Northern England. I’ve also attended a Praise and Worship meeting, which was different, but still very nice. There’s a group of girls here from the U.S., and they invited us to their apartment for some Praise & Worship. I won’t say it’s my kind of spirituality, but I still enjoyed seeing it, and experiencing another brand of sincere devotion to Christ.

Well, that’s about all I can think of at the moment. I’ll take more pictures soon. I’ve decided to stay here until the end of March, so please pray for me to have a spiritually rewarding Lent, here with the sisters. I love you all very much and will see you soon!