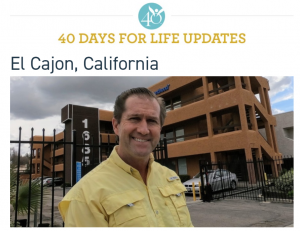 In El Cajon, CA, as James prayed in front of Planned Parenthood, a woman stopped her car to ask him about whether he was pro-life even in cases of rape.

When James replied that the unborn child is always innocent, the woman suggested that a baby conceived in rape would be a scar–a constant reminder of the assault.

“That innocent human being might also be an opportunity for love to heal the wounds of the injustice done to the victim,” James responded.

The woman thanked him for his compassionate reply and drove away! 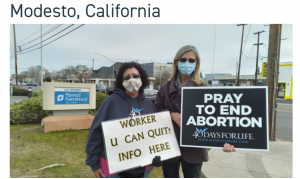 A man approached Janice as she stood vigil and shared that in his younger years, he lost a child to abortion.

Janice consoled him and gave him resources for post-abortion healing. The man remained at the vigil for some time, praying from his knees on the hard, concrete sidewalk. 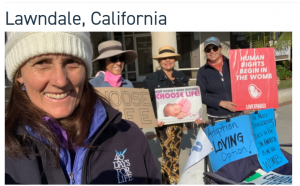 A man stopped to share his much more recent abortion experience with vigil participants in Lawndale.

“He wanted to keep the child, even raise it on his own,” said Laura, the Lawndale campaign leader. “But she would have none of it and aborted.” 40 Days for Life participants prayed with the man, who was grateful to accept post-abortion healing resources.

“Our laws failed to protect both him and his child,” Laura noted.

In Thousand Oaks, CA, an angry young woman approached 40 Days for Life participants to give them a piece of her mind.

After yelling at an older gentleman, she argued that without abortion, pregnant rape victims would be “imprisoned.”

But the volunteers were ready for the challenge, explaining that science convinced them of the humanity of the unborn child.

“We mostly listened to her,” said Thousand Oaks campaign leader Leonore. “She asked us what we offer the women, and we told her. We even discussed Margaret Sanger and Planned Parenthood’s eugenicist past, which she didn’t know about.”

“Yes, you’re right,” the woman said. “Most guys are sitting around or staying away from the women, and you’re out here trying to help them!”

The woman asked Leonore for a hug before departing with an Unplanned DVD, courtesy of the vigil participants.

A similar scene played out just two days later when a pair of college freshmen confronted Cindy and some friends at the vigil.

Again, the peaceful, loving witness made the difference.

“We ended up having a fully respectful, loving, spiritual conversation with these two young women,” Cindy said. “It was such a blessing to see God using us to reach them with His message.” 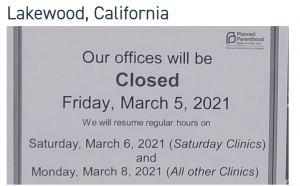 Saturday is the busiest abortion day in America…

…but on a recent Saturday, 40 Days for Life participants in Lakewood, California arrived to the vigil and found Planned Parenthood unexpectedly closed.

“Could it be that our ‘Friday Faithful’ group is having an impact?” asked Lynda, the campaign leader. “I certainly think so. They get a lot of positive attention and support out there with honks, smiles, waves and thumbs ups. The kind of attention Planned Parenthood doesn’t want.” 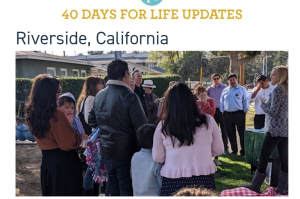 Two women arriving at the Riverside, CA Planned Parenthood angrily complained about the pro-life presence on the sidewalk as they pulled into the parking lot.

But within the hour, the driver told the prayer warriors that her friend had chosen to keep her baby.

The two women left the abortion facility with a markedly different demeanor. This time, both waved enthusiastically at vigil participants with big smiles on their faces.

Campaign volunteers provided the young mom with pregnancy help resources–and upon learning that her boyfriend is abusive, they also directed the woman to resources to safeguard her own safety.

“Thank God we were there at that hour to assist this woman in crisis,” said one of the vigil participants. “God was so merciful to touch her heart and direct it in the opposite direction!” 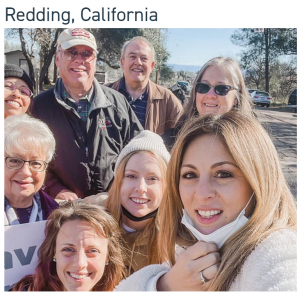 “We have seen three weeks in the last two months where they didn’t do their Wednesday abortions,” the team continued. “What a great answer to prayer. God is moving.” 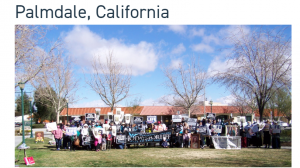 Pro-life momentum is growing in Palmdale, California! “Our largest gathering yet!” said 40 Days for Life leader Julio, describing a prayer procession to his community’s Planned Parenthood facility. Featuring clergy and a diverse group of nearly 100 peaceful prayer warriors, the event provided a powerful witness to the community that Southern California is pro-life! 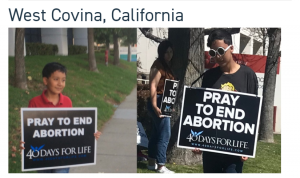 “I thank God for allowing me to tell my kids about the importance of defending what is right and just,” Antonio continued.
The above comes from a March 22 email from 40 Days for Life via Californians for Life.