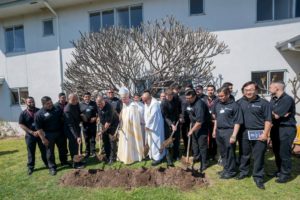 The patch of land where an old apartment building-turned convent rests is the future site of the Catholic Church in Los Angeles.

Archbishop Jose Gomez blessed and broke ground of the new Queen of the Angeles Center for Priestly Formation in Torrance, California.

“Vocations to the priesthood, that’s one of my priorities in the archdiocese and I will say that Diego House and Lady of Angels Formation of Priest Center is really helping all of us in the archdiocese,” said LA Archbishop Jose Gomez.

The Queen of Angeles has operated for 15 years in 8 different spaces, each year giving about 30 young men the chance to answer a calling like Jeff Roxas, a third year seminarian that chose the altars over hospitals.

“The only aspect that I love about doctors is that they’re so caring to others, but at the same time I was so involved in my parish community,” said Roxas. “Faith and service really combined and collided and God gave me the answer and followed me into the path of the priesthood.”

For the next 18 months, classrooms, dorms, and a chapel will be built to house 40 seminarians in one roof.

After they complete their undergraduate studies here, they transfer to Saint John’s Seminary in Camarillo before they are ordained as full-fledged priests.

“I’m excited. We’re all going to be together this time. It’s not like separate houses that we’ve had before,” said seminarian Jerick Alenton.

Another seminarian, John Coronel, added, “It’s a beautiful thing. Something like this is so extraordinary because it shows God’s work in this archdiocese.”

While a handful of Filipino seminarians look forward to calling the place home, Filipino priest Father Ray Marquez also looks forward to helping them in their journey as an associate director.