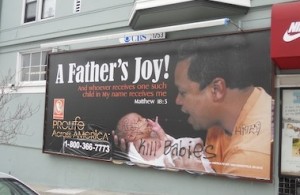 The following comes from an Oct. 1 posting on ProLife Across America.

Our billboards featuring a baby alongside a fetal development fact have been repeatedly vandalized and damaged, according to Mary Ann Kuharski, Director of PROLIFE Across AMERICA.

Graphic graffiti including vulgar messages, such as “Kill the shrimp” scrawled over the face of a baby, has continually marred the ads located in the Bay and Eureka areas. In spite of surveillance cameras and warnings of prosecution by the outdoor ad company, the pro-life ads continue to be vandalized, as well as the structure displaying the ad.

The tender messages portraying the face of an infant, along with a fetal development fact, also offer an 800# hotline number, for those seeking pregnancy information, medical care, or post-abortion assistance. PROLIFE Across AMERICA, known as “The Billboard People” sponsors over 6500 billboards – appearing in over 40 states – each year. The two areas in California are the only places where the ads have met opposition.

“Our ads have proven to change hearts and save babies’ lives”, said director Mary Ann Kuharski, who restated the group’s intent to continue the billboard outreach, as funding allows. “We recently learned of three babies saved from abortion because of our ads and 800 hotline.
We are saddened that our tender messages have met with such organized opposition. So often, our message may be the only visible sign of hope and help to someone feeling abortion is their only “‘solution’.” 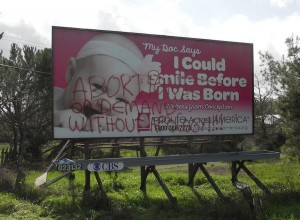 New pro-life billboards have gone up along with additional security measures but the crime continues to plague the pro-life messages. “We ask for prayers that not only can we continue to support billboards in this area but also for the vandals committing these crimes” said Kuharski.