Kids and adults evangelize on the street in San Francisco

A useful roadmap for the evangelization ministry is presented in Catholic Street Evangelization: Stories of Conversion and Witness by Steve Dawson, published by Ignatius Press.

When Eva Muntean, Assistant Director of Sales at Ignatius and co-chair of the Walk for Life West Coat, read Dawson’s book, she was immediately inspired and gave a copy to her pastor, Fr. Joseph Illo of San Francisco’s Star of the Sea Church, telling him “We’ve got to do this!”  After Fr. Illo read the book, he called Ms. Muntean back, saying “yes, we’ve GOT to do this!”

While Fr. Illo took a leadership role early on by announcing the new ministry in the parish bulletin, in the parish newsletter, and from the pulpit at Mass, the work of evangelization fell on the laity. A small group of parishioners formed, and the decision was made to try the first evangelization at the nearby Farmers Market, a three-block stretch of Clement Street close to the parish that is closed to car traffic on Sundays. The first street evangelization was offered on Sunday, July 17. More than a dozen people participated—children as well. Muntean described their attitude before the evangelization as “excited anticipation.”

Ms. Muntean told CalCatholic that the responses left the evangelizers ‘walking on air.’ “Our first time taught us a lot,” said Muntean. “We realized it was best for all of us to work in pairs—we can see why Jesus and Mother Teresa to always sent people out ‘two by two.’ What we found most effective was handing out Miraculous Medals with the intro of ‘Hello, would you like a free MM – these were the medals Mother Teresa handed out to everyone she met.’ This probably worked partly because of the word ‘free’ and partly because it’s hard to refuse anything to do with Mother Teresa. 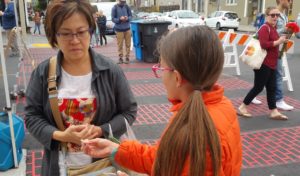 We were also lucky to have some children helping us. They were so persistent and positive. Almost everyone who rejected medals from the adults took medals from the children. They could not resist. One man, a non-believer, asked, ‘Did Jesus tell you to hand these out today?’ The children replied, ‘YES!’ emphatically and positively. The man didn’t have a single comeback. Another man rejected a medal from one little girl only to come back 20 minutes later to say, “I changed my mind. May I have one please?”

Vivian, a street evangelization participant, said “one man who took a Miraculous Medal came back about 20 minutes later and said, ‘I need to tell you a story so that you understand why this medal is so meaningful to me.’ He pulled out his key chain, and attached to it was a three-inch Miraculous Medal, which the man explained had been given to him by the priest who gave last rites to his dying wife. He explained that even though he is not a Catholic (his mother was Catholic and his father was Muslim, he added), he has kept the medal ever since as a reminder of his wife and the kindness of that priest. ‘Once I realized that the medal you gave me was the same as this one from the priest,’ he said, ‘I had to return to say thank you.’”

Clarisse and Marc, the two evangelizers who spoke with a Buddhist/Atheist for over an hour, said “at the end, Dan [the man they met] was joyful. His countenance was changed (as was ours!!) I asked if we could pray with him. He was sort of resistant, but I went ahead anyway. I thanked God for the day, for the gift of life and for bringing us together this day, and I asked Him to guide Dan along in his spiritual journey. It was really awesome. Thanks be to God! Thanks be to the Holy Spirit! All Glory and Majesty to the Lord our God!”

Ms. Muntean told CalCatholic: “Since then we have engaged in 5 more evangelizations—the most recent last weekend, when we started an important new service. We’ve started bringing a ‘prayer box’ where people can write their intentions and we will be placing the intentions on the altar the following Sunday and praying for the intentions as a parish. We did this for the first time this past Sunday and had an amazing response. Even people who don’t believe in God want to be prayed for! We really feel that we are doing the work that God wants from us: the unbelievable joy of sharing the good news of the coming of the Lord!”