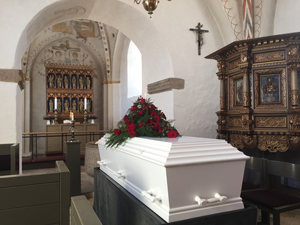 The following comes from a November 14 Community in Mission blog post by Msgr. Charles Pope

In this month of All Souls, it is good to reflect on funerals. It concerns me that very few people today seem to understand the real purpose of a funeral. The way in which we conduct ourselves at funerals, the manner of preaching at funerals, and other visible attitudes expressed at funerals not only teach poorly, but are often a countersign of biblical and Church teaching on death, judgment, Heaven, and Hell.

1. There is basic confusion about the purpose of a funeral. Many people arrive at the parish to plan a funeral, presuming that the funeral should be all about “Uncle Joe,” who he was, what he liked, etc. This leads to a series of requests, some of them inappropriate. For example:
1 Uncle Joe’s favorite song was My Way, so we want a soloist to sing it at the funeral.
2 Uncle Joe had three favorite nieces who would each like to speak after Communion to say “a few words” about what a great uncle he was.
3 Uncle Joe was a big football fan; he never missed a game. So we’d like to have flowers in the team colors and a football displayed on a table near the altar. We received a letter from the team’s front office and we’d like to have it read in tribute after Communion (after the nieces).
4 Father, in your sermon please remember to mention Joe’s great concern for such-and-such cause. Oh, and don’t forget to mention that he was a founding member here at St. Esmerelda’s and was the president of the parish men’s club.

Well, you get the point. Of course none of this is the real purpose of a funeral at all. Like any celebration of the Sacred Liturgy, the Funeral Mass is primarily for the worship of God, the proclamation of the Gospel, and the celebration of the paschal mystery. Secondarily, the Mass is offered for the repose of the soul the deceased, inviting prayer for the judgment he faces and for his ultimate and happy repose after any necessary purification.

As a practical matter, in my parish we do not allow relatives or friends to speak during the Funeral Mass. If someone wants to say a few words, it is done before Mass starts. Once the Funeral Mass begins, though, it is the Mass and only the Mass.

A step is skipped at most funerals. Upon the death of a loved one there is often the instant declaration that “He’s in Heaven now.” Sometimes it’s worded a little differently: “She’s in a better place” or “He’s gone home.” Of course such statements are grossly presumptive and in making such declarations, people attempt to sit in the judgment seat that belongs only to Jesus. If I were to say, “Uncle Joe is in Hell now,” people would be justifiably angry and accuse me of being “judgmental.” But of course those who say “Uncle Joe is in Heaven now” are doing the very same thing. Purgatory and the concept of purification after death are rarely mentioned at funerals, but should be. Purgatory is the likely destination of most of the dead, for at least some purification after death.

The whole point of praying for the dead is Purgatory! If the dead are in Heaven, then they don’t need our prayers. Sadly, if they are in Hell, they can’t use them either. It is those in Purgatory who both need and can use our prayers.