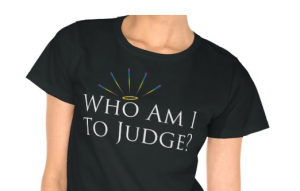 The following comes from an Aug. 29 posting by Anne Hendershott on Catholic World Report.

A popular t-shirt at New York City’s Gay Pride Parade this summer was yet another take on the “Who am I to judge?” shirt featuring Pope Francis’ famous phrase. This newest shirt features a saintly halo over the letter “o” with rainbow rays radiating from it. The product description for the shirt on Zazzle.com proclaims: “Celebrate the ever so slight progression toward acceptance of gays with this quote by Pope Francis.”

In some ways, the t-shirt is indeed accurate—one can of course be gay and still be saintly. As Father John Harvey, OSFS, the founder of Courage, often suggested, there is no reason that men and women who experience same-sex attraction cannot be saints. “It is for us, the men and women of Courage, to remain ever the faithful sons and daughters of Mother Church…belonging to Christ,” Father Harvey said.

The heart of Courage spirituality, based on the writings of Saint Francis de Sales and on the apostolate’s “Five Goals,” is a belief that “sanctity is possible in everyday life.” If this is what the halo over the t-shirt’s “Who am I to judge?” slogan is referring to, we should celebrate such a sentiment. None of us should be judging others in a way that effectively ends the possibility for sanctity in their lives. The Gospel warns that we should never be so final in our judgments of others that we refuse to leave open the possibility for sainthood for any of us—but, Jesus makes it clear that we are called to cultivate good judgment about good and evil. He chastised the Pharisees for neglecting “the weightier things of the law: judgment and mercy and fidelity” (Matthew 23:23).

The t-shirts at the Gay Pride Parade tell us to “stop judging,” but Jesus teaches us to cultivate good judgment about good to be done and evil to be avoided. At the same time, he also teaches us to avoid those judgments that marginalize others—banishing them to the sidelines without any hope of returning to God and his life-preserving way for their lives. In today’s culture, we are much more likely to be like the Pharisees in our avoidance of judging others. Criticizing same-sex behavior and same-sex marriage has become so politically incorrect that few are willing to defend the teachings of the Church in their public lives. This non-judgmental approach can result, even if unintentionally, in a neglect of “the weightier things of the law,” the law that Christ came, not to abolish, but to fulfill.

Still, there are courageous souls within the gay community who are willing to cross the boundaries and admit that the Church has something important to say. Letters to Christopher is authored by an anonymous blogger who is grateful for the Church and her teachings—and her call to chastity.

He describes himself as:

a forty-something single man, living in the Midwest, who lives with same-sex attraction. I believe in the saving grace of Jesus Christ, communicated lovingly through the teachings of the Catholic Church. Though the Church’s teachings go against the tide of public opinion on the subject of homosexuality, I have found great freedom through the universal call to chastity. As a middle-aged man, thinking back on my time as a teenager, I conceived of this blog as a means to reach teenagers who may be questioning their sexuality.

The Letters to Christopher blog is not a place where individuals are judged for the choices they are making in their lives. Rather, it is a place that celebrates the “true radicals” who understand that it is difficult to deal with same-sex attraction, yet it is still possible to be faithful to the teachings of the Church amid such difficulty. It is a place—like Courage—that understands that while none of us are perfect, we are all called to the saving message of Christ’s redeeming love. The golden halo on the “Who am I to judge?” t-shirts may be the perfect reminder for all of us.

This post was co-authored by Father Dan Pattee, TOR, chair of the Department of Theology at Franciscan University of Steubenville.