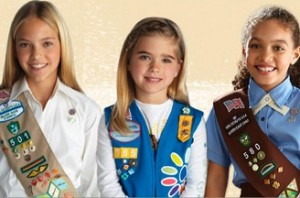 Update from one of our readers: The ladies that  led the campaign have  an email address  [email protected].   At their website they provide comments on the  2013-14 Girl Scout Investigation by USCCB Committee on Laity, Marriage, Family Life and Youth and an updated cookie boycott flyer.

The following comes from a Feb. 2 posting on Les Femmes blog site.

Time to find out what GS really stands for — girl seduction. I remember back in the 1970s when the Philadelphia council was testing a badge called “becoming a woman.” One of the suggested activities was visiting an abortion mill.

I kid you not!

Today, some GS councils actively partner with Planned Parenthood. On March 5, 2004 on NBC’s Today show, Kathy Cloninger, GS CEO from 2003-2011 admitted it saying that some scout councils partner “with Planned Parenthood organizations across the country to bring information-based sex education programs to girls.”

Just what parents are looking for, eh?

Among other things,
the GS council in Waco, for 14 years, worked with Planned Parenthood to put on a sex conference called Nobody’s Fool for girls in grades five to nine. Among materials distributed at this conference in 2003, was a graphic book called  It’s Perfectly Normal: Changing Bodies, Growing up, Sex, and Sexual Health. There’s a YouTube video on this by American Life League exposing the pornographic book, I will not post the video because my blog feeds to Facebook and I don’t want children exposed to this garbage. But, adults, you need to see what the Girl Scouts think is acceptable for your children. Watch the video here. The graphic areas of photos are blurred, but some of the language in the book, which is quoted, is too graphic for children.

STOPP (Stop Planned Parenthood) surveyed councils across the country in 2004. A third responded and of those who did 22% partnered with PP, which equals about 7% of the councils. Well, that doesn’t sound too bad does it? 93% don’t partner with PP.

Hmmm. If you had ten children and only one was molested and raped would that be an acceptable percentage to you? I didn’t do enough research to identify how many partner with PP today, eleven years later, but in view of our hyper-sexualized culture and GS cooperation with it, I suspect it’s many more.

In 2010 GS sponsored a workshop with several other groups at the U.N. during its Commission on the status of women. It was a girls-only event and adults were barred. Among the materials available to participants was a booklet called, Healthy, Happy and Hot: a Young Person’s Guide to Their Rights, Sexuality and Living with HIV. This is another graphic piece of porn for children telling them they “there are lots of different ways to have sex and lots of different types of sex….Just have fun, explore, and be yourself.” This booklet even tells kids they need not tell their sex partners if they have HIV and encourages “safer sex” and “safe abortion.”

If your girls are in GS you definitely need to learn more about the corruption of this organization. Even if your local troop is fine, a significant portion of those cookie sales go to nations scouting to support the evils described above and others.

Get more information and just say no to those cute little girls outside Walmart and Target. You might tell the adults why. As a matter of fact the first link below is to a flyer that exposes exactly where that cookie money goes. And if somebody says, “Hey, most councils are good!” ask him if he would open a box of GS cookies to feed his children after dinner if he knew that only one, ONLY ONE, cookie in the box was poisoned. Somebody’s children are being damaged by the egregious actions of the Girl Scouts. It might not be yours, but aren’t we, as Christians, called to defend our brothers and sisters?

Here are some places to start learning more about the corruption of the Girl Scouts:

Speaking the Truth about Girl Scouts