EWTN moves next to Disneyland

The following comes from a July 24 story on al.com.

The religious network founded in Alabama by a nun, pioneer TV broadcaster Mother Angelica, is moving into the famous former building of another pioneer TV evangelist.

EWTN will remain headquartered in Irondale, Ala., where it has its main studio.

Crystal Cathedral Ministries, the ministry that grew out of the church founded by Schuller in 1955, filed for bankruptcy in 2010.

The campus near Disneyland was purchased by the Catholic Diocese of Orange, California in 2011 for $57.5 million and the church has been renamed Christ Cathedral. EWTN hopes to begin using the studio to transmit news, televised Masses, and inspiring stories of faith to its global audience by the end of the year. A joint announcement of the new facility was made at the annual Napa Institute gathering in Napa, California on July 24 by EWTN Chairman and Chief Executive Officer Michael Warsaw and Bishop Kevin Vann, head of the Diocese of Orange. 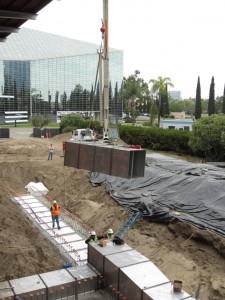 The diocese took possession of the property in September 2013 and began an extensive renovation to restore the 34-acre campus and its seven buildings, upgrading them to modern earthquake and energy efficiency standards. The diocese has worked to develop the facility to share its events, liturgical celebrations, news and other topics of interest with audiences throughout Southern California and the world….

Knitters for the Lord ramp up for ChristmasCapistrano shut-ins touched