Freshman John Gartonzavesky called home from Thomas Aquinas College on the evening of December 4, the last Monday of the Fall semester. He told his mother that “the hills behind my dorm are on fire.” 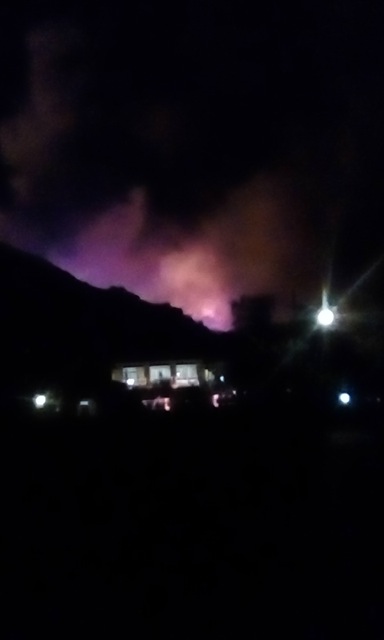 He texted her an alarming photo [left]. Huge flames from Thomas fire—which got its name from its origins near the college—flared against the horizon only ½ mile away.

John’s mother thought he was acting far too calmly, and she urged him to stick close to his older brother, Nicholas, who is an upperclassman. John found Nicholas getting his car ready to get away.

When Nicholas drove away with his brother and three other students, none of them knew whether they’d be able to go back to their college again.

By December 10, power was still out. The fire had burned up to the perimeter road and completely surrounded the campus. Even though the fire was (and still is) raging aways to the north and west, the road into the college was now drivable, and students had been allowed to return briefly to pick up their possessions for the past few days.

John had plans to stay home until the college reopens early in January. Nicholas was driving back the next day. Nicholas usually works as a cook during breaks, but now he will be in charge of the maintenance crew. “We have a big job facing us.”

The college has started a fundraising page to pay for the $60,000 cost of a generator (which is still needed because the power will be out in the area for an uncertain amount of time) and for other expenses, which they think could easily rise to tens of thousand of dollars.

College officials asked for prayers for firefighters and those around them who suffered worse harm from the fire. More than nine hundred homes were lost, and at least two people have died thus far.

With more 230,000 acres charred, the Thomas fire is the fourth largest in state history. Officials say that with the high winds and difficult terrain, it may take weeks or possibly months to completely put the fire out.