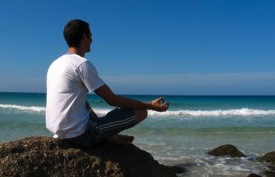 The following comes from an Aug. 29 posting by Connie Rossini on ContemplativeHomeschool.com.

Last winter on social media, I came across another Catholic author who was promoting yoga. Not as an exercise program, but for spiritual growth. I was shocked. I asked her why she wasn’t promoting prayer instead. She answered, “Meditation is prayer!”

Two months ago, my brother forwarded an email from a colleague, asking about Centering Prayer. A friend was pushing it relentlessly. I looked at the website of the Catholic group that promotes Centering Prayer and found this in the FAQs:

This form of prayer was first practiced and taught by the Desert Fathers of Egypt … the Carmelites St. Teresa of Avila, St. John of the Cross and St. Therese of Lisieux…

The other day a new reader asked in the comments about meditating on Sacred Scripture. “Is this the same as the method of Father John Main, who has adapted an Eastern mantra method for Christian meditation?”

I have written a little on this topic before, but I think it’s time to revisit it. Let’s start with Teresa of Avila.

Teresa of Avila and John of the Cross are doctors of the Church. They are THE experts on Christian prayer. So what method of prayer did Teresa teach? Are you ready to be surprised?

Now that you’ve picked yourself off the floor, let me clarify that a bit. A passage in Teresa’s Foundations does explain briefly how her nuns should practice meditation. But you won’t find a word about this in her classics on prayer Interior Castle or Way of Perfection. Why not? Teresa was not concerned with methods of prayer, but with stages of prayer. She never taught that meditation was a necessary prerequisite to contemplation, let alone the same thing as it.

She had good reasons. In Way of Perfection she mentions a nun who was unable to meditate, but became holy by praying the Our Father slowly and reverently. Teresa herself spent years unable to pray unless she had a book to read, because constant distractions plagued her.

In other words, she knew that everyone was different and that one method of mental prayer would not suit all souls.

Don’t just take my word for it. Here are what others have said:

What we find in Ss. Teresa and John and in Scripture is a very different message… as far as I can find, not a single sentence … speaks of methodology as a means to deep communion with the God of revelation.” (Father Thomas Dubay, Fire Within, 111)

While St. Teresa was well acquainted with methods of meditation and wished her young nuns to be instructed in them, she emphatically insisted that the primary need for beginners is not to find the ideal method but to do God’s will from moment to moment throughout the day.”

For Saint Teresa, mental prayer–the door of the castle and the way of perfection–is less a particular exercise than the very practice of the spiritual life…” (53 in the combined 2-volume work with I Am a Daughter of the Church)

Here are the words of Teresa herself:

Mental prayer, in my view, is nothing but friendly intercourse, and frequent solitary converse with Him Who we know loves us.” (Way of Perfection)

According to temperaments, the intercourse of friendship will assume an intellectual form, or an affective, or even sensitive one. The child will put its love for Jesus in a kiss, a smile sent to the tabernacle, a caress for the infant Jesus, an expression of sadness before the crucifix. The youth will sing his love for Christ and will encourage its growth by using expressions and images that strike his imagination and his senses, while waiting until his intellect can provide strong thoughts to form a more spiritual and more nourishing prayer.” (55)

Do you see how important this is? If true mental prayer, the necessary preparation for the gift of contemplation, requires an elaborate method, it is elitist. Such a way bars the ignorant, children, and those of certain temperaments or psychological weaknesses from being contemplatives. It bars them from intimacy with Christ. It makes holiness the possession of the few who know enough and who have the right natural gifts. This is not the Gospel!

Children can become saints. Some have. For St. Therese of Lisieux, spiritual childhood was the way to reach the heights of holiness very quickly. And we are supposed to believe that she taught a form of prayer that was reserved for the few?

On the contrary, the essential element is not a method, but the loving friendship between the person praying and God.

St. Therese speaks in a similar way as her patron saint and spiritual mother:

With me prayer is a lifting up of the heart, a look towards Heaven, a cry of gratitude and love uttered equally in sorrow and in joy; in a word, something noble, supernatural, which enlarges my soul and unites it to God…. Except for the Divine Office, which in spite of my unworthiness is a daily joy, I have not the courage to look through books for beautiful prayers…. I do as a child who has not learned to read, I just tell our Lord all that I want and he understands.” (Story of a Soul, Ch. 11)

Do you see any indication there of a method we should all follow? In contrast to this, those who want to learn Centering Prayer are encouraged to attend a retreat or workshop or take an online course. But the proponents of Centering Prayer still insist it’s not a technique! It doesn’t take a workshop or a class to learn to speak to God from the heart. Moses spoke to God “as a man speaks to his friend.” That is mental prayer.

Now, I’m not saying that we shouldn’t practice any method of prayer. Methods help us stay on track. They help us not sit idly in our prayer time. Some methods are better than others. But the key is this: no one method of prayer is required to prepare us for contemplation. And no method at all can make us contemplatives.

Contemplation is the goal. And contemplation is not an altered state of consciousness. It is not peaceful feelings. It is a supernatural gift. It is God drawing the soul to Himself on His own initiative. It is a progressive union with Him.

Do not look for God in pagan religious practices. The Church gives us all we need and more, without the dangers of dabbling in foreign religions.

As for Father John Main, the criticisms I have read of his method are very similar to criticisms of Centering Prayer. It too originated in pagan religions, trying to make their practices Catholic, and failing. Christ, not a mantra, is the focus of our prayer. Father Main’s organization has been accused of syncretism. He apparently learned his method of “prayer” from a Hindu Swami.

If you want to know what Carmelites mean by contemplation, read the two posts that begin here. God willing, I will speak about prayer further next week.