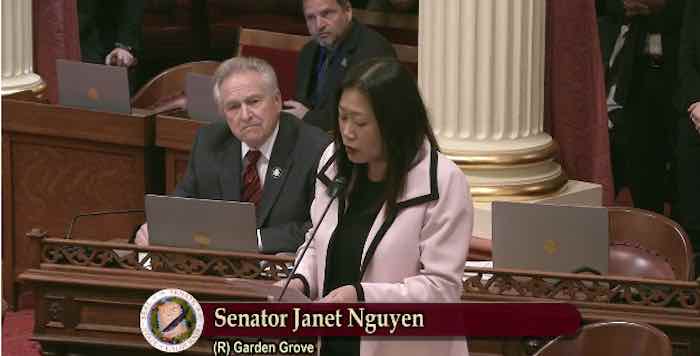 California State Sen. Janet Nguyen (R-Garden Grove), was forcibly removed from the Senate Thursday morning for offering a different perspective on the late Sen. Tom Hayden, a Democrat with a well-known and lengthy history of communist sympathies.

The perspective Sen. Nguyen offers is first hand. Her family escaped communist Vietnam and came to the United States in search of freedom in 1981 during Ronald Reagan’s presidency.

Sen. Nguyen and I spoke Thursday shortly after the incident. She said Tuesday the Senate had scheduled a memorial for the late former state Sen. Tom Hayden, who died in October. Hayden served 18 years in the Legislature.

The left has always portrayed Hayden as a “counterculture figure who led civil rights and antiwar protests in the 1960s.” However, “When Joan Baez organized a petition to protest Hanoi’s racist pogrom against Vietnam’s ethnic-Chinese minority, Hayden defended Hanoi,” the Wall Street Journal reported. “The fact is that Hayden’s life was in large part a crusade for the cause of the Vietnamese communists. He returned from his trip to Hanoi in 1965 singing the praises of North Vietnam.”

Nguyen said she had prepared a speech offering her perspective on what Hayden meant to the Vietnamese people for the Tuesday Senate memorial, but because his family was there, she chose to wait for another day.

Sen. Nguyen and her staff asked Senate Rules what the proper process was for presenting her comments in the Senate. But she was told she could not make the speech about Hayden, and should “respect others’ perspectives about Hayden and his many decades of public service.”

“I was told I could prepare a statement for my Senate website or my Facebook page,” Nguyen said.

Undeterred, Thursday, Nguyen began her speech in Vietnamese, and switched to English, at which time she was quickly cut off by Democratic leadership.

“Today I recognize in memory the millions of Vietnamese and hundreds of thousands of Vietnamese refugees who died in seeking freedom and democracy,” Sen. Nguyen said. “On Tuesday you had an opportunity to honor Sen. Tom Hayden. With all due respect, I would like to offer this historical perspective…” At that point Nguyen was cut off by Sen. Ricardo Lara (D-Bell Gardens), presiding over the Senate, who then gave the floor to Sen. Bill Monning (D-Carmel). While Nguyen was still trying to give her speech, Monning repeatedly yelled over her that she was out of order.

Upon Lara’s order, Nguyen’s microphone was lowered by a Sergeant, but she continued her speech, even as Lara repeatedly asked her to sit down. He eventually ordered the sergeants to remove Sen. Nguyen from the Senate floor.

Nguyen said she found the Democrats’ attempts to silence her ironic, when in May 2016, Sen. Mark Leno (D-San Francisco) spoke in opposition to a resolution honoring former President Ronald Reagan for advancing the public good. Leno, who was critical of Reagan’s cuts to AIDS research funding, spoke at length against Reagan, and said he would not support the resolution.

“I’m enraged at the violation to free speech, our Constitution and the precedent this sets,” said Sen. Republican Leader Jean Fuller. “I do not believe a Democratic staffer should be able to tell one of the elected members that they are not allowed to use their freedom of speech rights to represent their people. All of her comments were legitimately representing the people in her district.” Fuller has asked the Senate Rules Committee to look into the incident.

The Sen. Republican Caucus has this video of the incident on Twitter