Do you believe in God?

Diana: Yeah. I don’t think that we are alone in the world. I would like to think that we have Someone taking care of us. I don’t pray or go to church.

If someone asked you why you believe in God what would you say?

Diana: I think everybody’s free to think whatever they need to think. Maybe I would say that I believe in God because it helps me to not feel alone.

Do you do any religious ceremonies?

Diana: Christmas, there’s something about that. I’m Mexican and in Mexico Christmas is related to God. I don’t know if it’s the same here. I think that’s the only thing that we do.

Diana: The Son of God that came to earth.

Diana: It’s not good if you are doing it all the time or for an unimportant reason, but it depends.

What do you think about same-sex marriage?

Diana: I think it’s good. It doesn’t hurt anybody.

What do you think happens after we die?

Diana: I don’t know what happens after we die. I would like to believe in heaven. 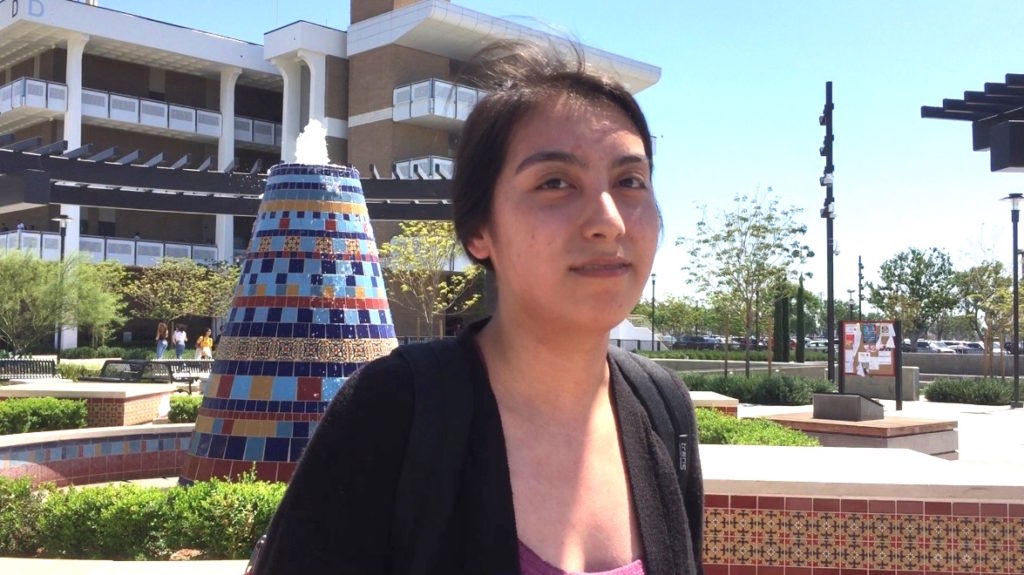 Andrea: No. My family is religious. We went to church. I went to Catholic school and I hated it, the way that they would teach us about certain things, their explanations for certain events that had nothing to do with religion to begin with. The people there were kind of sketchy, too. I would move churches a lot because we would move houses so we had to change churches. I think in total I’ve been to four churches. The one that impacted me negatively is the Immaculate Heart of Mary. That’s the one where I did most of my Catholic school. I don’t believe in God.

Does your family know that you are not religious?

Andrea: Yeah, they kind of joke about it but then at the end of the day they’re like, “you should probably go to church,” and I’m like, “no.”

Do you have an explanation for how the world came to be?

Andrea: Not really, I’m trying to figure it out myself.”

How do you decide what’s right and wrong?

Andrea: Ooo, I don’t know actually. I mean, I know not to hurt people, that’s pretty bad, or to force people to believe in something. That’s kind of what religion has done for me. Because I know we’re all different, we all come from different walks of life, so I don’t want to force people into having one certain mindset but rather being more open-minded.

Andrea: I’m cool with it, yeah.

What about the argument that abortion hurts somebody?

Andrea: Well, there’s a lot of scientists that say it doesn’t hurt the child unless it’s like five months.

Couldn’t you say, though, that abortion before five months is like killing someone in their sleep?

Andrea: I don’t know how to answer that one, but I’m cool with abortion as long as the mother is with it and if the mother’s life is in danger then I’m cool with it as well. But from a religious standpoint, saying all abortion is bad, I don’t agree with that.

Do you actively believe there is no God or do you simply not care to know?

Do you think you’ll ever wonder or that something could make you believe?

Andrea: I don’t think I would ever believe.

Praying every day at Cal Poly San Luis ObispoYitzel is Catholic and loves God, but is pro-choice and doesn't see the point of a Church wedding

Praying every day at Cal Poly San Luis Obispo
Yitzel is Catholic and loves God, but is pro-choice and doesn't see the point of a Church wedding

Oakland prostitutes outside St. Anthony parish schoolScott Wiener says his loitering bill is not the cause

Oakland prostitutes outside St. Anthony parish school
Scott Wiener says his loitering bill is not the cause