Commitment to his granddaughter Emma

The following comes from an Oct. 30 story on World Net Daily.

Bill Dodd was a graduate of Justine Catholic High School in Napa and showed up for a high school reunion, according to another Justine alumnus.

A Democratic Party candidate for the California State Assembly has mailed out a flyer trumpeting his commitment to women’s rights, including abortion on demand, but some who received the campaign piece think he may have pushed the envelope too far.

More plainly, they’re wondering if the candidate, Bill Dodd, has even thought through the chilling implications of his advertisement.

On the flyer Dodd is pictured holding his baby granddaughter, Emma.

Below that pledge is a picture of Dodd lovingly looking down at his granddaughter, Emma, who is shown sitting on his lap. 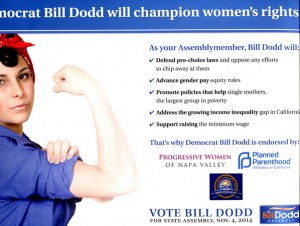 “That’s his commitment to every Californian, including his granddaughter, Emma,” the flyer states.

The other side of the flyer repeats the pledge to champion women’s rights and lists Dodd’s top priority as working to “defend pro-choice laws and oppose any effort to chip away at them.”

Dodd’s flyer sent shivers down the spines of California pro-lifers because it could easily be interpreted as Dodd championing his granddaughter Emma’s right to abort his own future great-grandchild.

One of the recipients of the mailer was a conservative woman who lives in state House District 4, which includes Napa County and all or parts of five other counties west of Sacramento and north of the San Francisco Bay area.

The woman saw the message and was “floored,” according to one pro-life organization in the state….

Charlie Schaupp, the Republican candidate running against Dodd, was contacted by WND but said he has not seen the flyer… “He’s probably saying that his granddaughter has the right to choice over her own body,” Schaupp said. “That’s true, we all do have that power, but we have responsibility too, and that’s to protect the life of the unborn and all innocent life….”