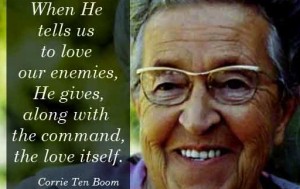 The following comes from a Sept. 23 story on Fox News,

It’s hard to imagine that any school would have a problem with a book about a Christian family that helped Jews escape the Holocaust.

But Springs Charter Schools in Temecula, Calif., not only had a problem with The Hiding Place, they also took issue with any other book that was written by a Christian author or included a Christian message.

“We do not purchase sectarian educational materials and do not allow sectarian materials on our state-authorized lending shelves,” Superintendent Kathleen Hermsmeyer wrote in a letter to attorneys at the Pacific Justice Institute (PJI).

Why would a public charter school take issue with books written by Christians? Pacific Justice Institute is representing a parent who discovered what they called a “Christian purging” of the charter school’s library.

Pacific Justice Institute is representing a parent who discovered what they called a “Christian purging” of the charter school’s library.

Among the books deemed inappropriate, the PJI said, was The Hiding Place the biography of Corrie ten Boom, a Dutch Christian who was imprisoned by the Germans for helping Jews escape the Holocaust….

I figured Superintendent Hermsmeyer would be more than willing to set the record straight and explain the book purging. It seems I figured wrong. I gave her 24 hours to return my calls, and as of this writing, she has not done so.

But she did reply to the letter she received from Pacific Justice Institute. And what she told them was a bit alarming.

“We are a public school, and as such, we are barred by law from purchasing sectarian curriculum materials with state funds,” she wrote. “We only keep on our shelves the books that we are authorized to purchase with public funds….”