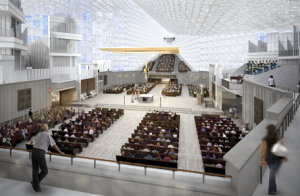 The following comes from a Sept. 24 posting on Whispers in the Loggia.

The rollout is on – three years since its $57.5 million acquisition, the centerpiece plans for Crystal Cathedral’s transformation into the seat of the 1.3 million-member diocese of Orange are being released at this hour at the Garden Grove site.

Currently slated for dedication as Christ Cathedral in early 2016, this video lays out the process behind the liturgical redesign – and, for the first time, reveals the anticipated result.

While the main church is the climax of the project (an effort funded as part of a $100 million capital campaign), much of the 35-acre campus has already been put into use by the Orange church: the diocesan offices and a school moved into other buildings there last year, and 11 weekend Masses are now celebrated in three languages at the campus’ Arboretum – the site’s first structure erected by Dr Robert Schuller – which opened as Catholic worship-space in mid-2013. In the future, the plot will likewise host the West Coast base of EWTN under a recently reached agreement.

The work on the main building described as “one of the most challenging architectural undertakings in the history of the church,” Bishop Kevin Vann is expected to provide further details tomorrow in a public launch at Orange’s annual prayer breakfast. In the meantime, the diocesan weekly has prepared a centerfold spread of the plans (click on image to enlarge)…

…and in a series of videos, the members of the design team explain the employment of the liturgical items and spaces piece by piece, while an interactive map lays out the changes taking place across the entire site.