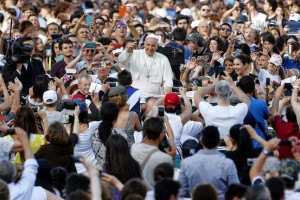 The following comes from a June 16 Pew Research Center article:

A new Pew Research Center survey finds that U.S. Catholics’ views on global warming are broadly reflective of American public opinion writ large; a solid majority believe that Earth is warming, but there is much more division over the cause and seriousness of climate change. Moreover, the poll shows that climate change is a highly politicized issue that sharply divides American Catholics, like the U.S. public as a whole, mainly along political party lines.

About seven-in-ten U.S. Catholics (71%) believe the planet is getting warmer. Nearly half of Catholic adults (47%) attribute global warming to human causes, and a similar share (48%) view it as a very serious problem.

Among the U.S. public as a whole, belief that global warming is occurring is nearly twice as common among Democrats as Republicans (86% vs. 45%). The view that global warming is caused by human activity is roughly three times as common among Democrats as among members of the GOP (64% vs. 22%), as is the view that it represents a very serious problem (67% vs. 21%).

Generally speaking, Catholics express higher levels of belief in global warming and concern about its effects than do Protestants, but lower levels than people who are religiously unaffiliated (atheists, agnostics and those whose religion is “nothing in particular”). However, analysis of the survey findings shows that political party identification and race/ethnicity are much better predictors of environmental attitudes than are religious identity or observance.

In addition, the survey sought to explore what Catholics like – or don’t like – about the pope by asking whether Francis exhibits three positive and three negative qualities. Roughly nine-in-ten or more say they think Francis is “compassionate,” “humble” and “open-minded.” About one-in-five Catholics (19%) describe him as “too liberal,” while one-in-seven (15%) consider him “naïve” and one-in-ten (11%) think he is “out of touch.”

Catholics who report attending Mass at least once a week are more likely than those who attend less regularly to hold a very favorable view.