This past Sunday, January 24th, CWR received the following e-mail from Twitter: 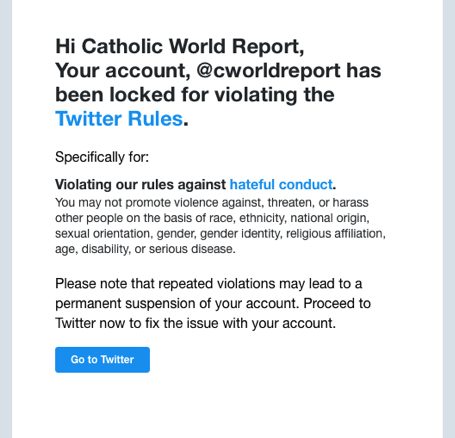 Violating our rules against hateful conduct.

You may not promote violence against, threaten, or harass other people on the basis of race, ethnicity, national origin, sexual orientation, gender, gender identity, religious affiliation, age, disability, or serious disease.

The Tweet in question (screenshot attached) was of this Catholic News Agency news brief, written by Matt Hadro, posted on CWR on January 19, 2021. It stated:

“Biden plans to nominate Dr. Rachel Levine, a biological man identifying as a transgender woman who has served as Pennsylvania’s health secretary since 2017, to be HHS Assistant Secretary for Health. Levine is also a supporter of the contraceptive mandate. https://t.co/mY1Y8S5p2S

Can you please explain how this Tweet—a news account on a news site—specifically violated Twitter rules and/or how it supposedly involved “hateful conduct” or “harassment”?

Thank you for your patience as we reviewed your appeal request for account, @cworldreport, regarding the following:

Our support team has determined that a violation did take place, and therefore we will not overturn our decision.

In order to restore account functionality, you can resolve the violations by logging into your account and completing the on-screen instructions.

Twitter is clearly indicating that unless CWR and other outlets jump through arbitrary and constantly-changing rhetorical and ideological hoops, they cannot use Twitter. Just as bad, Twitter is implicitly making CWR admit to hateful or bigoted language, even though such was never the case. Not only is such an approach subjective in nature, it is an overtly biased, unfair, and discriminatory approach that both stifles free speech and undermines CWR’s right to report on current events.

Catholic World Report, which is operated by Ignatius Press, was founded by Fr. Joseph Fessio, S.J., thirty years ago. In late 2011, CWR went entirely online, and I was appointed as editor. At that same time, CWR opened its Twitter account; by the start of 2021, CWR’s Twitter account had 8500 followers.

The vast majority of CWR Tweets have been of links to CWR articles, reviews, interviews, and news briefs, with a headline, short descriptive, and link.

CWR is currently reaching out to other outlets about similar experiences and expects to post more on this story soon.

The above comes from a Jan. 28 story by Carl Olson, editor of Catholic World Report.