For some, “visiting the prisoner” may not be the most instinctive of the seven corporal acts of mercy. This is not the case for more than 100 Catholics recognized by the restorative justice ministry of the Archdiocese of San Francisco at a service appreciation awards dinner April 25 at St. Mary’s Cathedral. Alone or in groups of other volunteers, they visit city, county and state prisons, and juvenile justice centers to read, to pray, to sing, but mostly just to be with prisoners as they struggle with the consequences of their actions, and the uncertainty of their circumstances and human worth.

‘We are part of one body. When one part hurts, we all suffer.’

Ramon and Patricia Marquez’ youngest child Michael, was by their account, a compassionate young man who even from a young age saw others as human beings, not as their circumstances or problems.

Their response to his murder at age 22 almost five years ago was to model the open heart he offered others during his life by becoming volunteers with Comunidad San Dimas, a Christian youth detention ministry served by the Archdiocese of San Francisco.

Ramon considers the time he and his wife spend together with the incarcerated nothing short of a moral imperative of being Catholic.

“I’m just doing my little part,” he said, adding that “going to church on Sunday is not enough. Jesus calls us to act.”

‘What these kids need is what we all need.’

It’s been well over 50 years since Deacon Dana Perrigan was a wayward 14-year-old boy, angry and isolated in a cell at San Francisco Juvenile Hall.

He brings that boy and the man he became to his longtime role as a volunteer at Comunidad San Dimas, a Catholic ministry to incarcerated teenagers in San Francisco.

“I’m an old guy now, but it was one of the most grueling things I’ve ever experienced,” Perrigan told Catholic San Francisco. “My heart goes out to those kids because I know what they are going through.” 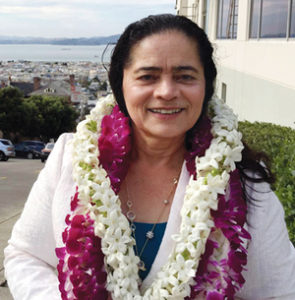 Esperanza Navas, a parishioner of St. Peter Parish in the Mission District, began volunteering with Comunidad San Dimas, a Catholic detention ministry for incarcerated youth, after her only son was killed 18 years ago.

Her son had been a volunteer at San Dimas before he died and Navas wanted to continue doing “positive things” in his memory.

Being a restorative justice volunteer is something that “gives me life,” Navas said, and keeps her positive despite the loss of her son.

She said she has always felt safe and never felt threatened by any of the inmates.

“Sometimes I am in a room alone with six young men, and I am not afraid,” she said.

After 18 years she has not grown weary of her service, either.

“The reward is so enormous that one does not feel tired of doing it,” she said.

LA Catholics embark on ministry to sick and dyingSisters trained 13 members of Fraternity of Lay Sons and Daughters of St. Maria Soledad

LA Catholics embark on ministry to sick and dying
Sisters trained 13 members of Fraternity of Lay Sons and Daughters of St. Maria Soledad