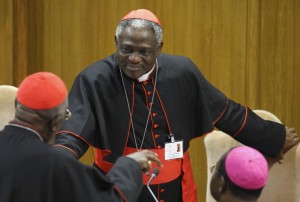 SANTA CLARA – Pope Francis’s recent historic encyclical letter calling on Catholics and others to “hear the cry of the earth” will be the topic of a two-day conference November 3-4 at Santa Clara University, entitled Our Future on a Shared Planet: Silicon Valley in Conversation with the Environmental Teachings of Pope Francis.

Headlining the conference will be Cardinal Peter Turkson, the Ghanaian Cardinal who is president of the Pontifical Council for Justice and Peace. Cardinal Turkson is widely acknowledged as one of the most influential Vatican experts on the contents of the celebrated encyclical document, Laudato Si, for which he was an adviser.

In addition to a planned keynote address by Cardinal Turkson the afternoon of November 3, several panelists and speakers are being convened to address topics such as the political, scientific, corporate and theological implications of the encyclical.