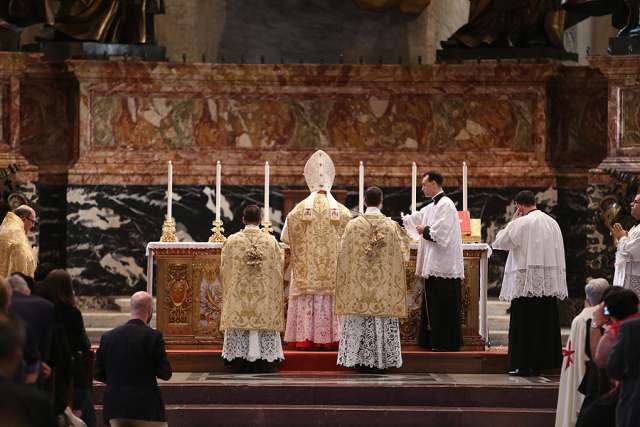 July 7 is the tenth anniversary of Pope Benedict XVI’s Summorum Pontificum, a decree that allows priests to celebrate the form of the liturgy of the Mass before it was reformed in 1970. For most Catholics, this will likely fall into the category of ecclesiastical arcana, and pass unnoticed. Yet this same decree’s widespread obscurity—enacted primarily to insure “worship worthy of God” throughout the Church—implicitly shows that Catholic liturgy following the Second Vatican Council (1962-65) did undergo significant changes, some marking a departure from centuries of tradition. Successful revolutions, after all, usually involve a loss of memory before the year zero, the inauguration of a new era.

It’s hard today for many Catholics to imagine a Mass spoken in Latin, or chanted in Gregorian chant, with the priest facing liturgical east, because so many Catholics now worship with a different orientation than before the reforms of Paul VI, the pope who brought Vatican II to a close, and implemented the liturgical innovations he felt necessary to bring the Church more in tune with the modern world.

Yet Benedict’s decree has taken root. In the late 1970s, there were, in the United States, less than a dozen communities celebrating the old rite, usually without canonical recognition by a local bishop. Today, there are over 400 parishes (admittedly a small fraction of the total number) that regularly offer the Extraordinary Form of the Roman Rite, as Pope Benedict called it in 2007. This growth is significant for a number of reasons.

One reason is the old rite is suffused with a sense of the sacred. Part of this involves the amount of silence woven into the old Mass. Those who have tasted this sacred silence don’t easily forget it. Many unknowingly yearn for it. Last week at my parish, for instance, I noticed after Communion many in the pews—parents, grandparents, some singles—virtually trying to wrap themselves in silence, with hands to their faces, seemingly saddened, as if they could not reach further into the mysterious embrace to which they had been called. I think I know what they were missing, though I dare not speak for them. I only say, look at this ancient Mass, see what has been taken away from you, perhaps even before you were born.

I realize that when the Extraordinary Form was simply the Roman rite, it wasn’t paradise in every parish in the Catholic Church. There was, after all, the “Here comes everybody” reality, which is how it should be: Christ died for everyone, not simply those sensitive to aesthetic values. But the ancient form of the Mass should hardly be considered only for those with so-called highbrow tastes, for the benefit this liturgy brings is for everyone.

In his recent book, The Power of Silence, Cardinal Robert Sarah put his finger on the fevered pulse of our contemporary culture: “The tragedy of our world is never better summed up than in the fury of senseless noise that stubbornly hates silence. This age detests the things that silence brings us to: encounter, wonder and kneeling before God.” Having in many places lost this sacredness of the liturgy, is it any surprise that, as Cardinal Sarah notes, we see a world increasingly incapable of wonder, of silent awe in the presence of God?