The following is the full English text of Archbishop Carlo Maria Vigano’s second letter regarding clerical abuse by Cardinal McCarrick and its coverup within the Vatican. To read the first letter from Archbishop Vigano, click here.

Before starting my writing, I would first of all like to give thanks and glory to God the Father for every situation and trial that He has prepared and will prepare for me during my life. As a priest and bishop of the holy Church, spouse of Christ, I am called like every baptized person to bear witness to the truth. By the gift of the Spirit who sustains me with joy on the path that I am called to travel, I intend to do so until the end of my days. Our only Lord has addressed also to me the invitation, “Follow me!”, and I intend to follow him with the help of his grace until the end of my days.

“As long as I have life, I will sing to the Lord,

I will sing praise to my God while I have being. May my song be pleasing to him;

For I rejoice in the Lord.”

It has been a month since I offered my testimony, solely for the good of the Church, regarding what occurred at the audience with Pope Francis on June 23, 2013 and regarding certain matters I was given to know in the assignments entrusted to me at the Secretariat of State and in Washington, in relation to those who bear responsibility for covering up the crimes committed by the former archbishop of that capital.

My decision to reveal those grave facts was for me the most painful and serious decision that I have ever made in my life. I made it after long reflection and prayer, during months of profound suffering and anguish, during a crescendo of continual news of terrible events, with thousands of innocent victims destroyed and the vocations and lives of young priests and religious disturbed. The silence of the pastors who could have provided a remedy and prevented new victims became increasingly indefensible, a devastating crime for the Church. Well aware of the enormous consequences that my testimony could have, because what I was about to reveal involved the successor of Peter himself, I nonetheless chose to speak in order to protect the Church, and I declare with a clear conscience before God that my testimony is true. Christ died for the Church, and Peter, Servus servorum Dei, is the first one called to serve the spouse of Christ.

Certainly, some of the facts that I was to reveal were covered by the pontifical secret that I had promised to observe and that I had faithfully observed from the beginning of my service to the Holy See. But the purpose of any secret, including the pontifical secret, is to protect the Church from her enemies, not to cover up and become complicit in crimes committed by some of her members. I was a witness, not by my choice, of shocking facts and, as the Catechism of the Catholic Church states (par. 2491), the seal of secrecy is not binding when very grave harm can be avoided only by divulging the truth. Only the seal of confession could have justified my silence.

Neither the pope, nor any of the cardinals in Rome have denied the facts I asserted in my testimony. “Qui tacet consentit” surely applies here, for if they deny my testimony, they have only to say so, and provide documentation to support that denial. How can one avoid concluding that the reason they do not provide the documentation is that they know it confirms my testimony?

The center of my testimony was that since at least June 23, 2013, the pope knew from me how perverse and evil McCarrick was in his intentions and actions, and instead of taking the measures that every good pastor would have taken, the pope made McCarrick one of his principal agents in governing the Church, in regard to the United States, the Curia, and even China, as we are seeing these days with great concern and anxiety for that martyr Church.

Now, the pope’s reply to my testimony was: “I will not say a word!” But then, contradicting himself, he has compared his silence to that of Jesus in Nazareth and before Pilate, and compared me to the great accuser, Satan, who sows scandal and division in the Church — though without ever uttering my name. If he had said: “Viganò lied,” he would have challenged my credibility while trying to affirm his own. In so doing he would have intensified the demand of the people of God and the world for the documentation needed to determine who has told the truth. Instead, he put in place a subtle slander against me — slander being an offense he has often compared to the gravity of murder. Indeed, he did it repeatedly, in the context of the celebration of the most Holy Sacrament, the Eucharist, where he runs no risk of being challenged by journalists. When he did speak to journalists, he asked them to exercise their professional maturity and draw their own conclusions. But how can journalists discover and know the truth if those directly involved with a matter refuse to answer any questions or to release any documents? The pope’s unwillingness to respond to my charges and his deafness to the appeals by the faithful for accountability are hardly consistent with his calls for transparency and bridge building.

Moreover, the pope’s cover-up of McCarrick was clearly not an isolated mistake. Many more instances have recently been documented in the press, showing that Pope Francis has defended homosexual clergy who committed serious sexual abuses against minors or adults. These include his role in the case of Fr. Julio Grassi in Buenos Aires, his reinstatement of Fr. Mauro Inzoli after Pope Benedict had removed him from ministry (until he went to prison, at which point Pope Francis laicized him), and his halting of the investigation of sex abuse allegations against Cardinal Cormac Murphy O’Connor.

In the meantime, a delegation of the USCCB, headed by its president Cardinal DiNardo, went to Rome asking for a Vatican investigation into McCarrick. Cardinal DiNardo and the other prelates should tell the Church in America and in the world: did the pope refuse to carry out a Vatican investigation into McCarrick’s crimes and of those responsible for covering them up? The faithful deserve to know.

I would like to make a special appeal to Cardinal Ouellet, because as nuncio I always worked in great harmony with him, and I have always had great esteem and affection towards him. He will remember when, at the end of my mission in Washington, he received me at his apartment in Rome in the evening for a long conversation. At the beginning of Pope Francis’ pontificate, he had maintained his dignity, as he had shown with courage when he was Archbishop of Québec. Later, however, when his work as prefect of the Congregation for Bishops was being undermined because recommendations for episcopal appointments were being passed directly to Pope Francis by two homosexual “friends” of his dicastery, bypassing the Cardinal, he gave up. His long article in L’Osservatore Romano, in which he came out in favor of the more controversial aspects of Amoris Laetitia, represents his surrender. Your Eminence, before I left for Washington, you were the one who told me of Pope Benedict’s sanctions on McCarrick. You have at your complete disposal key documents incriminating McCarrick and many in the curia for their cover-ups. Your Eminence, I urge you to bear witness to the truth.

Finally, I wish to encourage you, dear faithful, my brothers and sisters in Christ: never be despondent! Make your own the act of faith and complete confidence in Christ Jesus, our Savior, of Saint Paul in his second Letter to Timothy, Scio cui credidi, which I choose as my episcopal motto. This is a time of repentance, of conversion, of prayers, of grace, to prepare the Church, the bride of the Lamb, ready to fight and win with Mary the battle against the old dragon.

In you, Jesus, my only Lord, I place all my trust. “Diligentibus Deum omnia cooperantur in bonum” (Rom 8:28). 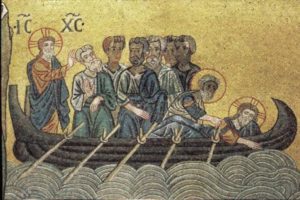 To commemorate my episcopal ordination on April 26, 1992, conferred on me by St. John Paul II, I chose this image taken from a mosaic of the Basilica of St. Mark in Venice. It represents the miracle of the calming of the storm. I was struck by the fact that in the boat of Peter, tossed by the water, the figure of Jesus is portrayed twice. Jesus is sound asleep in the bow, while Peter tries to wake him up: “Master, do you not care that we are about to die?” Meanwhile the apostles, terrified, look each in a different direction and do not realize that Jesus is standing behind them, blessing them and assuredly in command of the boat: “He awoke and rebuked the wind and said to the sea, ‘Quiet! Be still,’ … then he said to them, ‘Why are you afraid? Do you still have no faith?’” (Mk 4:38-40).

The scene is very timely in portraying the tremendous storm the Church is passing through in this moment, but with a substantial difference: the successor of Peter not only fails to see the Lord in full control of the boat, it seems he does not even intend to awaken Jesus asleep in the bow.

Has Christ perhaps become invisible to his vicar? Perhaps is he being tempted to try to act as a substitute of our only Master and Lord?

The Lord is in full control of the boat!

May Christ, the Truth, always be the light on our way!

Why would anyone follow German bishops’ lead?Phil Lawler points out that millions of Germans are leaving the Catholic Church

Why would anyone follow German bishops’ lead?
Phil Lawler points out that millions of Germans are leaving the Catholic Church

The Cardinal Pell memo in fullCirculating among cardinals in 2022, author revealed this week to be the just deceased Australian prelate

The Cardinal Pell memo in full
Circulating among cardinals in 2022, author revealed this week to be the just deceased Australian prelate

Cardinal Muller opens up to Raymond Arroyo about synod'If they succeed, it will be the end of the Catholic Church'

Cardinal Muller opens up to Raymond Arroyo about synod
'If they succeed, it will be the end of the Catholic Church'