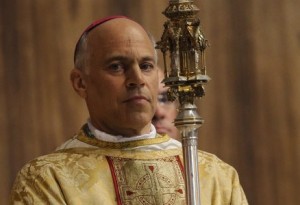 On Saturday, October 10, Archbishop Salvatore Cordileone will once again lead his flock as he bears the Blessed Sacrament through the streets of San Francisco at the Fifth Annual San Francisco Rosary Rally. The rally will be held in the city’s United Nations Plaza at 12 noon.

The San Francisco Rosary Rally was reborn in 2011 as an effort of the SF Senatus of the Legion of Mary. Other groups quickly joined the effort: Immaculate Heart Radio, The Knights of Columbus, Ignatius Press, Cruzada Guadalupana Arquidiócesana,  the Archdiocese of San Francisco, and the Archdiocesan Ministry for Spanish Speaking.  The 2011 rally marked the 50th Anniversary of Fr. Patrick Peyton’s 1961 Rosary Crusade, held in the City’s Golden Gate Park. That event drew over 550,000 people—still the largest crowd ever assembled in San Francisco.

On August 7, San Francisco’s Archbishop Salvatore Cordileone sent a letter to all pastors of the Archdiocese, urging them to lead their flocks to the Rally: “Since our first rally five years ago, the event has drawn an ever-growing number of priests, religious and faithful onto our streets to pray. These faithful come from San Francisco and beyond. Their intention is very simple: to pray for the needs of our great City and nation. I believe the presence of so many people in prayer is a great witness to those with whom we share our City. It is a sign too that God is truly with us and the Faith is alive…I invite you and your parishioners to join me in this celebration of our Catholic spirituality and tradition.”

The day begins with a 10:00 am Mass at the Cathedral of St. Mary of the Assumption, celebrated by Archbishop Cordileone, concelebrated by Father Arturo Albano, the rector of St. Mary’s Cathedral, and other priests. Following Mass, the Archbishop will lead the Eucharistic Procession from the Cathedral to United Nations Plaza, where the Rosary rally will begin at 12:00 noon.  When the Eucharistic procession arrives they will be greeted by a second group of Catholics, already at the plaza, praying the rosary.

Archbishop Cordileone will serve as keynote speaker and Father Albano will address the faithful in both Spanish and Tagalog. The rally will include exposition of the Blessed Sacrament and Benediction, and priests will be on hand to hear confessions.

This year’s special guest speaker will be Deacon Robert F. Ellis, the National Coordinator of the World Apostolate of Fatima, USA. As a special blessing, the National Pilgrim Statue of the World Apostolate of Fatima will be present. Deacon Ellis wrote recently: “St. Pope John Paul II considered Fatima more important today than it was in 1917. Pope Emeritus Benedict XVI cautioned that ‘we would be mistaken to think that Fatima’s prophetic mission is complete.’ Pope Francis’ request for the consecration of his pontificate to Our Lady of Fatima, which was honored on May 13, 2013, the entrustment of WYD 2013 to her, and his consecration of the world to her on October 13, 2013 – all occurring within the first year of his papacy – make his disposition toward the importance of Fatima crystal clear.” -‘How can a world gone mad be saved from itself.’