An 11th hour save at the abortion clinic 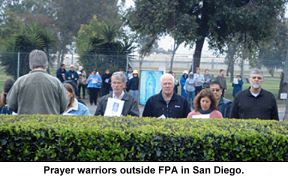 The following comes from a February 7 email from Helpers of God’s Most Precious Infants:

It was quite literally in the 11th hour, after a long frustrating morning of trying to talk to women, with little success, while the “yellow-shirt” escorts and security guard interrupted all of our efforts.

A few minutes before 11:00 am, shortly after most of the counselors had left, the remaining three counselors were getting ready leave when a car with out of state plates cruised slowly by the entrance to the clinic and parked in the far western parking lot. Two of the counselors slowly drifted in that direction, trying not to draw the attention of the yellow-shirts. After the couple got out of the car, the girl pointed toward the abortion clinic upstairs to her boyfriend, and one of the counselors quickly approached her, holding up a picture of a paramedic truck and firetruck parked in front of the clinic.

The counselor told the yellow-shirt to please go away, but they continued talking. The counselor asked the girl, “Could you please tell them to go away so we can talk, I want to help you”. She did, and they finally left. Not more than 20 seconds later, the security guard came over and basically said the same things the yellow-shirts were saying, interrupting the counselor. The counselor asked the couple to please tell the guard to go away so they could talk. This time the boyfriend told the guard to leave, and she did, smiling politely, as if surprised that someone would reject her offer to intercede.

The counselor was finally able to speak without interruption. The counselor told them about the risks and side effects of having an abortion, especially the emotional trauma that most women are not prepared for. He shared a picture of 6-week pre-born baby, and pointed out the details of early development, including the fingers, toes, eyes, etc. that were visible in the picture, and asked how far along she was. The young man said about 7 weeks. They both seemed surprised at how developed the unborn baby was at only 6 weeks. He showed them a life-size model at 12 weeks, and told the young woman that she was already a mother, and that abortion may seem like a quick fix, but was really the start of bigger problems, both in her relationships and the regret that could last a lifetime.

The girl was in her last year of high school, and was in a committed relationship. The counselor told her all about open adoption if she was not ready to be a parent, and how there was lots of help, including a maternity home for those who wanted to place their babies with adoptive parents. The counselor asked if the boyfriend was pressuring her into having an abortion, and she said no. The counselor told her that if they were planning on getting married someday, killing their first child would ruin their relationship.

She had not yet told her parents that she was pregnant. The counselor told her not to fear telling her parents, and that they would probably be disappointed in her, but if they loved her, they would be grateful she did not secretly kill their first grandchild. He told the couple there will never be the “right time” to have a baby, and that there will always seem to be a shortage of money, things to save for, a better job, a house, and so on, but that she can never replace the unique human being that is inside of her right now.

The counselor offered to take them to Culture of Life Family Services where they could seek further help and counseling. The couple quietly said a few words to each other, and said they would be driving home. The counselor gave her a Rosary, and told her he would pray for her and that God would bless her for making this decision.

Please pray for this young couple, that they have the courage and strength to continue choosing life for their unborn baby.